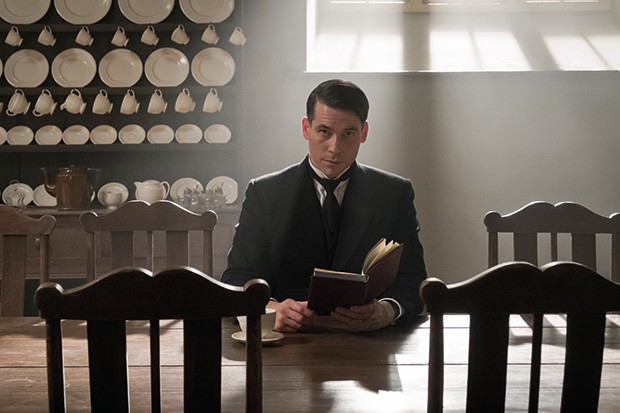 Peter Jackson’s They Shall Not Grow Old is a visceral, deeply moving reminder of things that mustn’t be forgotten.

We viewed Downton Abbey, the movie. No fresh ground was broken and there weren’t any startling insights. I expected neither. I missed at least the last two seasons of the series and maybe more; of course the characters still were familiar to me, sparing the film version from introducing and developing them. I’m no fan of the aristocracies of old, and it’s a bit off-putting when the denizens of the “downstairs” defend them. Why ostensibly “democratic” Americans find any of it compelling remains a question for the ages.

And yet, I was entertained, and the explanation comes in this positive review by Matt Zoller Seitz, with whom I’m unfamiliar. He hammers every nail, and the biggest one for me is the second paragraph in the excerpt below, because I’m the kind of viewer who “will travel some distance to see a film in which well-dressed, reasonably thoughtful adults do and say grownup things.”

The reason I watch very few movies is because the vast majority featuring “dinosaurs, robots, superheroes, or Jedi knights” (or whole comic book narratives) are of zero interest to me. When I want to escape reality, and like anyone else I do, it’s time to put on headphones for music or read a book.

To each their own. I really appreciate this movie review.

The star rating at the top of this review is not for people who don’t like “Downton Abbey,” have never seen it, or grew tired of watching it long before it finished its six-season run. Those viewers will consider this a two-star or one-star or no star movie. The rating is for die-hards who will comprise the majority of viewers for this big-screen wrap-up of the Julian Fellowes drama about nobles and servants in an early-20th century English manor. The rating is also for fans of a certain sub-genre of film and TV: lavishly produced costume dramas about repressed people who might cut loose with a bitchy remark now and again, but only if they’re pushed to decorum’s edge—or if, like Violet the Dowager Countess (Maggie Smith), they’re too old, tough, and set in their ways to care what anybody else thinks of them.

Finally, the rating is for the kinds of viewers who will, I suspect, turn this movie into an unexpected smash: those who might not feel obligated to leave their homes to watch blockbusters featuring dinosaurs, robots, superheroes, or Jedi knights, but will travel some distance to see a film in which well-dressed, reasonably thoughtful adults do and say grownup things. Said adults inhabit a tale set in something resembling reality, with banquets, dances, familial intrigue, gown fittings, chaste flirtations, declarations of love, and expertly timed reaction shots of characters silently disapproving of other characters. But the movie omits the Method masochism and “eat this bowl of chaff, it’s good for you” bombast that has increasingly become synonymous with Hollywood’s Oscar bait …