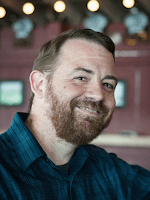 Hello Louisville is a new place to read about the Louisville scene, except that it’s an old place, at least according to the web site’s description.

In late 2017, we started a project of highlighting Louisville, Kentucky in the way we saw it and began posting these short stories on our social channels. What began as a passion project, geared toward the local modernist, has now evolved into something more. We wanted to create a place where people in Louisville could come and find information on local eateries, breweries, farmers markets, new restaurants, old restaurants, trendy places, dog friendly places, and so much more—without the hassle of all the negative stories one may have to sift through. Don’t get us wrong, the bad is just as important as the good, but we’re here to focus on the good.

What matters to me is that Kevin Gibson is back into the mix. I’ll be reading.

I started writing about the Louisville and Southern Indiana area in 1987. Yep, more than three decades as a writer, covering everything from local sports — my first assignment was a Bullitt North High School football game — to government, business, music, the arts, food and drink. Thirty-three years. (I know, I don’t look that old, do I? But I digress.)

Anyway, anyone who knows me probably knows how disappointed I was last summer when Insider Louisville abruptly shut down operations. We were literally told in a Monday morning meeting that we had to be out of our offices by end of day on Wednesday. Insider Louisville had become part of my identity in a way. I realized only when it disappeared that’s not something one recovers from quickly.

Now there’s Hello Louisville. Part of the mission here is to fill some of the void left by Insider simply by seeking out and sharing some of the best things in the city, from new restaurants and breweries, to cool events, people, new business news and anything else we think people will want to know about.