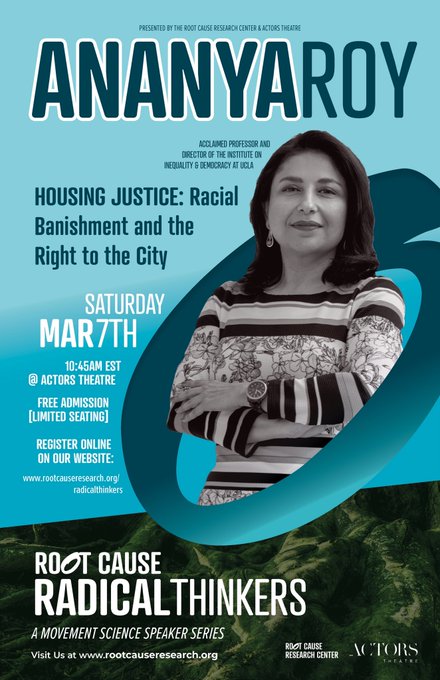 First, the event. Then we’ll define a few terms. The Root Cause Research Center is partnering with Actor’s Theatre of Louisville to launch “Root Cause Radical Thinkers: A Movement Science Speaker Series.”

On Saturday, March 7 at 10:45 a.m., Ananya Roy will be speaking about Housing Justice: Racial Banishment & a Right to the City. Roy’s talk at Actor’s Theatre is free of charge but you must reserve a place because seating is limited. Go here to do so.

Ananya Roy is Professor of Urban Planning, Social Welfare, and Geography and The Meyer and Renee Luskin Chair in Inequality and Democracy at the University of California, Los Angeles. She is inaugural Director of the Institute on Inequality and Democracy at UCLA, which promotes research and scholarship concerned with displacement and dispossession in Los Angeles and and seeks to build power to make social change. Previously she was on the faculty at the University of California, Berkeley, where she received her Master’s in City Planning (1994) and Ph.D. in Urban Planning (1999).

Ananya’s research and scholarship has a determined focus on poverty and inequality. Her work has focused on urban transformations and land grabs in the global South as well as on global capital and predatory financialization.

Three research and policy priorities are central to Ananya’s current commitments. First, she leads a National Science Foundation funded research network on Housing Justice in Unequal Cities. Building a shared terrain of scholarship across universities and movements, this network is concerned with advancing ideas, practices, programs, and policies of housing justice in Los Angeles as well as in other cities of the world. Second, Ananya’s research is concerned with “racial banishment,” the pushing out of working-class communities of color from urban cores to the far peripheries of metropolitan regions. In collaboration with housing justice lawyers and movements in Los Angeles, she studies the role of municipal ordinances in such processes of banishment. Third, since 2017, she has been actively involved in scholarship about sanctuary cities and cities of refuge. As evident in her recent article, The City in the Age of Trumpism: From Sanctuary to Abolition (Environment and Planning D), she seeks to expand practices of welcome and hospitality in order to take account of the long histories of settler-colonialism, imperialism, and slavery.

Here’s a snippet about the Root Cause Research Center.

We believe that the people most impacted by an issue are best positioned to discover the root causes and solutions of that issue. They are the ones with the firsthand experience, social context, insights, and networks that are necessary to fully unearth the whole story behind a deep-rooted problem.

The Root Cause Research Center works alongside and trains community members to investigate and report community concerns. We bring together impacted community members and train them in community organizing, research, and design–all to help them tell their own data stories to the public, to policymakers, and to other connected stakeholders. We partner with local grassroots leaders to launch Community-Based Participatory Research projects. We also design inventive and interactive visuals that break down complex information for policy change.

The Root Cause Research Center is a policy-focused, grassroots-led institution grounded in Data Equity, Movement Science, and Abolitionist Planning (see Definitions below). We are actively building a new system in the American South that provides an alternative to the traditionally hierarchical and classist model of research. We lean into transformative justice by creating community-based alternatives to dehumanizing and inaccessible research institutions that use impacted community members as test subjects rather than co-investigators.

New Albanians with memories of a time before taco walks will recall the Root Cause Research Center’s co-investigator Joshua Poe, who lived here in New Albany a decade ago. Here’s a forgotten piece he wrote in 2010 for the long dormant New Albany Bicycling Coalition blog. It actually was reprinted at Broken Sidewalk.

From contributor and New Albany resident Joshua Poe: “Observations about biking from New Albany to Louisville.”

And, a few more links about Poe’s work.

“It feels like planners in the U.S. sort of exist in a history vacuum. It’s important for them to look at this information and understand that a lot of city planning really involves dismantling systems like zoning and redlining.”