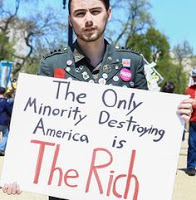 Seldom have I seen the gist of the matter explained as accurately and clearly as in the following essay by Chris Hedges.

Of course, today was eventful. If you’re gleeful at this seeming power move on the eve of Super Tuesday — Pete and Amy out for president, but very much with the “in crowd”, Bloomberg’s money still theoretically available to bankroll the nominee Biden, and Sanders at last deposed — your satisfaction is fully shared by the ruling power structure.

The oligarchy will find nothing disturbing in a center-right “democratic” platform stripped of meaningful content, one that excludes any mention of correcting (read: attacking) inequality. Even if this “GOP Light” capitulation were enough to defeat Trump, nothing much would change with the fundamental issues, would it? The tinkle-down would continue, as it has since RayGun was in charge.

Until you grasp this basic fact, center-right moderation borne of fear is just more of the same oligarchy fluffing. You’ll be sorry; but then again, that’s usually the way it plays out. We’ll have ineffectively treated the symptoms yet again, while allowing the disease to rage on.

Click through and read the whole damn thing. Get off those personality cult fetishes, and FOLLOW THE MONEY.


Class: The Little Word the Elites Want You to Forget (Common Dreams)

The culture wars give the oligarchs, both Democrats and Republicans, the cover to continue the pillage. Open, nonviolent revolt against the oligarchic state is our only hope.

Aristotle, Niccolò Machiavelli, Alexis de Tocqueville, Adam Smith and Karl Marx grounded their philosophies in the understanding that there is a natural antagonism between the rich and the rest of us. The interests of the rich are not our interests. The truths of the rich are not our truths. The lives of the rich are not our lives. Great wealth not only breeds contempt for those who do not have it but it empowers oligarchs to pay armies of lawyers, publicists, politicians, judges, academics and journalists to censure and control public debate and stifle dissent. Neoliberalism, deindustrialization, the destruction of labor unions, slashing and even eliminating the taxes of the rich and corporations, free trade, globalization, the surveillance state, endless war and austerity—the ideologies or tools used by the oligarchs to further their own interests — are presented to the public as natural law, the mechanisms for social and economic progress, even as the oligarchs dynamite the foundations of a liberal democracy and exacerbate a climate crisis that threatens to extinguish human life.

Oligarchic rule must be destroyed. If we fail, our democracy, and finally our species, will become extinct.

The United States stood on the cusp of revolution—a fact President Franklin Roosevelt acknowledged in his private correspondence — amid the breakdown of capitalism in the 1930s. Roosevelt responded by aggressively curbing the power of the oligarchs. The federal government dealt with massive unemployment by creating 12 million jobs through the Works Progress Administration (WPA), making the government the largest employer in the country. It legalized unions, many of which had been outlawed, and through the National Labor Relations Act empowered organizing. It approved banking regulations, including the Emergency Banking Act, the Banking Act and the Securities Act, all in 1933, to prevent another stock market crash. The Federal Emergency Relief Administration provided the equivalent in today’s money of $9.88 billion for relief operations in cities and states. The Democratic president heavily taxed the rich and corporations. (The Republican administration of Dwight Eisenhower in the 1950s was still taxing the highest earners at 91%.) Roosevelt’s administration instituted programs such as Social Security and a public pension program. It provided financial assistance to tenant farmers and migrant workers. It funded arts and culture. It created the United States Housing Authority and instituted the Fair Labor Standards Act of 1938, which established the minimum wage and set a limit on mandatory work hours. This heavy government intervention lifted the country out of the Great Depression. It also made Roosevelt, who was elected to an unprecedented fourth term, and the Democratic Party wildly popular among working and middle-class families. The Democratic Party, should it resurrect such policies, would win every election in a landslide.

But the New Deal was the bête noire of the oligarchs. They began to undo Roosevelt’s New Deal even before World War II broke out at the end of 1941. They gradually dismantled the regulations and programs that had not only saved capitalism but arguably democracy itself. We now live in an oligarchic state. The oligarchs control politics, the economy, culture, education and the press. Donald Trump may be a narcissist and a con artist, but he savages the oligarchic elite in his long-winded speeches to the delight of his crowds. He, like Bernie Sanders, speaks about the forbidden topic — class. But Trump, though an embarrassment to the oligarchs, does not, like Sanders, pose a genuine threat to them. Trump will, like all demagogues, incite violence against the vulnerable, widen the cultural and social divides and consolidate tyranny, but he will leave the rich alone. It is Sanders whom the oligarchs fear and hate.

The Democratic Party elites will use any mechanism, no matter how nefarious and undemocratic, to prevent Sanders from obtaining the nomination …