Bix Beiderbecke was born 117 years ago today in Davenport, Iowa. He died at 28 in 1931, and thanks to the LP collection at the public library, I discovered him around the age of 12 (okay; circa 1972).

Bixology means a lot to me. The first road trip that Diana and I made as a couple was to Davenport to stay at a bed and breakfast in Bix’s grandfather’s house, and to look for the musician’s resting place at the local cemetery. We’d missed the centennial party, but found the grave.

The recording of “I’m Coming Virginia” embedded here is typical of what Bix brought to music. This rendition somewhat morosely plods along until it’s the cornetist’s turn to solo, at which point the black and white blossoms into color.

Bix enters the proceedings as though from another planet; so it was throughout his sadly truncated life.

Following are two previously published remembrances, from 2007 and 2017.

What better time than my current period of home recuperation following rotator cuff surgery to break out Bix Restored for an epic listening party?

Bix Restored gathers all surviving 78 rpm records made by jazz cornetist Bix Beiderbecke (1903-1931) along with more than a few alternate takes. The music is arranged chronologically by recording date, and takes up four 3-compact disc sets.

From my vantage point astride the top floor recliner, and with frequent breaks for napping and the mandated three daily hours of physical therapy (ouch), I finished the final disc on Thursday evening.

With respect to jazz as an art form, Bix’s legacy is substantial, and dozens of professional musicologists and academics are fully capable of explaining why, sparing me the obligation other than to note that to a previous generation of his contemporaries, Bix symbolized the inventive, daring and hopelessly impractical artist, forced into artistic enslavement (see Whiteman, Paul) and then cruelly cut down in the prime of life.

The truth is somewhat more prosaic. Employment with Whiteman’s ponderous pop orchestra, with which Bix cut the majority of records, was in fact a plum position, highly paid and much sought. And, the sad reality of Bix’s self-destructive drinking habits – dying before the repeal of Prohibition of complications from alcoholism, Bix certainly ingested more than his share of rotgut – isn’t east to overlook even if he was universally adored by friends and fellow musicians.

In the end, the truth’s in the music. Bix’s full tone, clarity of phrasing and melodic lyricism usually carry the day even when accompanying musicians are clueless or Whiteman’s less adept arrangers clutter the soundscape with pomp and circumstance. In jazz parlance, he plays “cool” whether or not the music’s “hot.” He can’t help it.

Understandably, being dead for more than three quarters of a century and being known for skills on behalf of a uniquely American music that most Americans no longer acknowledge has its way of making millions of Americans forget all about you, with unpleasant ramifications for anyone who wants “to be remembered.”

However, as with cultural icons of previous eras, ranging from the Marx Brothers to the Berlin Wall, and from the Paul Reising Brewing Company to ordinance enforcement in New Albany, I’ll do my best to keep memories alive.

This strange holiday digression begins with a social media group devoted to jazz legend Leon Bismark “Bix” Beiderbecke, where this little known Christmas song from 1945 by Hoagy Carmichael was posted: “My Christmas Song For You,” with vocals by Martha Mears.

The reason why an obscure song by Hoagy Carmichael, as recorded 14 years after Beiderbecke’s woefully premature death, would be posted on a Bix fan site is that the two are inextricably linked, so much so that Carmichael chose “Bix” as his son’s middle name.

Furthermore, they met at Indiana University when Bix’s band the Wolverines came through Bloomington in 1924. This passage from a wonderful account at Indiana Public Media sets the scene.

Throughout that spring Carmichael found attending the Wolverines’ gigs difficult, as he was often working a date himself on the nights that Beiderbecke’s group played. On one of those first Saturday afternoons, however, the Wolverines set up at Hoagy’s frat to rehearse, and he finally got a chance to hear Beiderbecke—the newly-advanced Beiderbecke of 1924—play.

Carmichael would recount this scene time and again for the rest of his life. As the Wolverines started to warm up, “Every nerve in my body began to tingle,” he writes in Jazzbanders:

My hands shook… Then I saw Bix get out his cornet and Jimmy told him to take the break in the middle of the chorus… Bix played just four notes that wound up the afternoon party. The notes were beautiful, and perfectly timed. The notes weren’t blown—they were hit, like a mallet hits a chime, and his tone had a richness that can only come from the heart. I rose violently from the piano bench and fell, exhausted, onto a davenport. He had completely ruined me… I’ve heard Wagner’s music and all the rest, but those four notes that Bix played meant more to me than everything else in the books. When Bix opened up his soul to me that day, I learned and experienced one of life’s innermost secrets to happiness—pleasure that it had taken a whole lifetime of living and conduct to achieve.

“Something that he heard in either Bix’s tone or the way he put phrases together affected him very deeply,” Carmichael biographer Richard Sudhalter said in a 2002 interview. “Deeply enough so that when he started to try his own hand at writing music—also the suggestion of Beiderbecke—it was inevitable that his whole approach to phrase-building, to composition, would be based on what he’d heard coming out of Bix’s horn.”

It’s the same Richard Sudhalter whose book Lost Chords: White Musicians and Their Contribution to Jazz, 1915-1945 was reviewed here, earlier this year.

Much later in Carmichael’s life (he died in 1981), the songwriter discussed Beiderbecke’s inventive style; specifically, the way Carmichael once wrote a chorus for four cornets in an arrangement of another of his songs, “Old Man Harlem,” as a tribute of sorts to his friend.

Carmichael composed “Old Man Harlem” in 1933 with pop star Rudy Vallee; on a version recorded during World War II with Carmichael on piano, the drummer is Spike Jones of City Slickers fame. It was easy to find the recording mentioned by Carmichael with the Bix-like chorus.

Now this digression flies even further off the rails with a blog flashback to October 19, 2007.

This weekend: “New Albany to welcome Hoagy Carmichael for one final tour.”

A life-size bronze statue of Hoagy Carmichael at his Steinway Grand Piano will be visiting downtown New Albany, Indiana October 19-20, 2007 at the Speakeasy Jazz Club, 225 State Street, and Indiana University Southeast October 22-25. This visit is part of a statewide tour to re-engage Hoosiers’ knowledge of this creative composer and his enormous contributions to the landscape of American music. At the conclusion of the tour this fall, the statue will be dedicated and permanently installed at Indiana University in Bloomington, where Hoagy was born and received a law degree.

Somewhere I have a photo of the Speakeasy statute placement, but until it turns up, here is the view of the permanent setting in Bloomington. 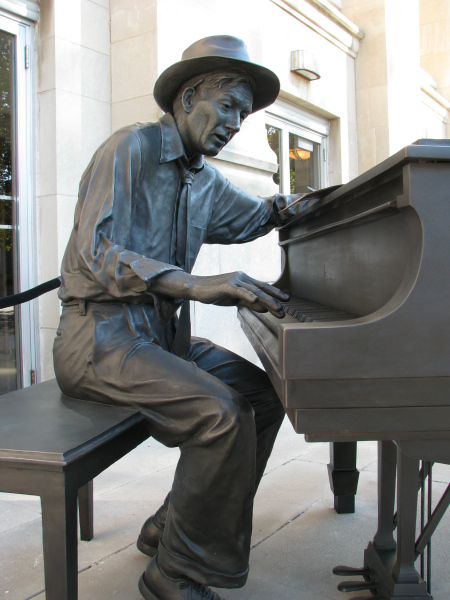 This stream of consciousness ends with a novelty tune occasioned by a mention in the Bookseller’s blog almost four years ago.

February 8, 2014
Word of the Year Entry: Barnacle (The NewAlbanist)

Barnacle Bill, the Sailor, is a now obscure but once vivid presence in popular culture. Several generations of children learned the song (at least the bowdlerized kiddie version) and it still maintains a commercial presence in various American seaside haunts, including several seafood restaurants.

Here is a raucous 1930 recording with both Hoagy and Bix present.

My final point has to do with barnacles. They’re eaten as a sort of bar food in Portugal, no doubt accompanied by Super Bock lager beer … and we’ll be there in 48 days.

I’ll drink a toast to Bix, Hoagy and the great musicians of their era before returning to fado.