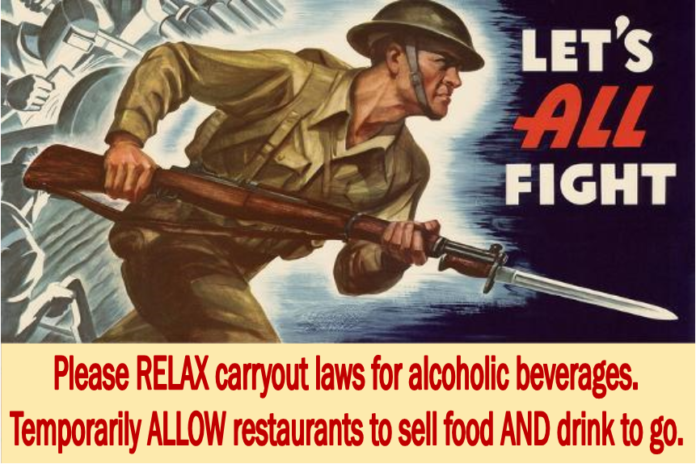 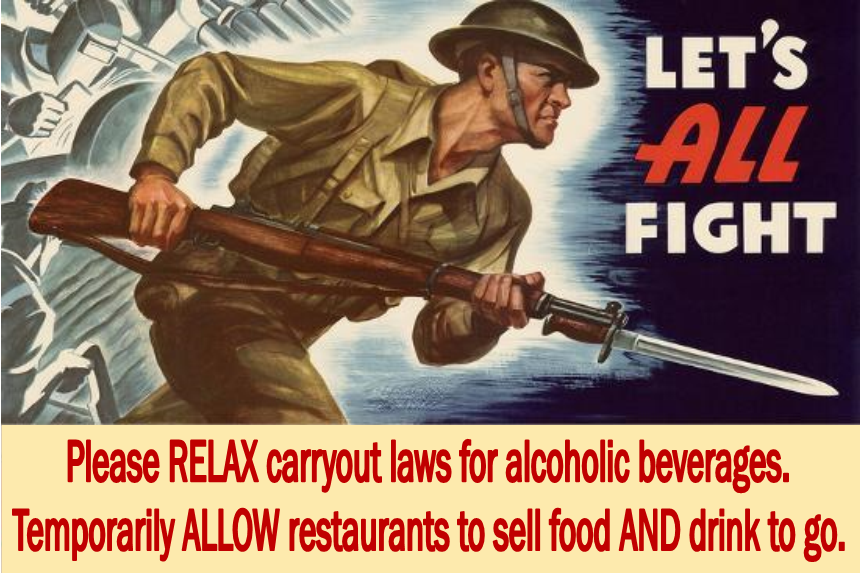 Noon Friday Update (March 20): As of yesterday evening, Indiana is implementing certain temporary carryout privileges for restaurants, as advocated in this column. It’s an ongoing story, with an overview here.

This will be a truncated edition of the weekly column. Since last week’s entry, everyday “normality” as most of us have experienced it throughout our lives has been suspended — temporarily, or so we’re told, although it’s worth remembering that most challenges of COVID-19’s magnitude usually end with a plethora of new, altered realities, some big and others small.

As a social worker, Diana as yet remains in the trenches, seeking to provide daily needs and services to at-risk populations. My world is the food, drink and hospitality business, and we’re in a state of siege. It is an existential crisis unlike any we’ve faced in the past century.

What I’m about to write may strike some as trivial in the context of society’s needs at this juncture, so let me assure you that I’ll not be asking for the moon and stars at a time of universal dumpster fires. Rather, I’m urging a common-sense improvisation pertaining to measures already announced, something that might assist my brethren to make it through to emergency’s end.

There may be other relevant improvisations I’m missing, and if so, let me know. Ears are wide open, and there’s ample opportunity for consideration.

My thinking on this matter began evolving when I saw this quote in the Indy Star by Eric Holcomb, governor of Indiana.

This is when it occurred to me that in the context of state-mandated closure orders for restaurants and bars — my family, my community — we’re the ones being asked to bear the brunt of the anti-COVID-19 resistance by buying time and being crippled or extinguished if necessary — in effect, to do what we can with to delay the invading hordes while stronger lines of resistance are being built in the rear.

It’s a common theme in military history, although it may not be the best time to recall what happened to Poland’s cavalry at the outset of the Second World War.

If it’s wartime analogies the governor prefers, then mine make perfect sense. It is not at all far-fetched, considering that the business fatality rate will escalate exponentially the longer the closure order (exempting food carryout) stands.

If this is a war, and if normality is subject to experimentation and revision, then perhaps it would be a good idea to examine further ways to help us fight the battle.

Naturally restaurants and bars are eager to do their part within these revised (and improvised) frameworks of operation. It remains that carry-out, curbside and delivery meals alone are an imperfect compromise for many of us, given that our business models rely on the margins from alcoholic beverages.

Those of us without state permits allowing for alcoholic beverage carryout sales, as with holders of riverfront area licenses, are being placed at even more of competitive disadvantage as we all struggle to make it through the state-mandated suspension of normal activities.

We’re holding inventories of beer, wine and spirits that are locked down. Most beers and wines don’t improve with age, either. Meanwhile package stores, supermarkets and drug stores are not subject to this p(P)rohibition.

If all on-premise sales are off-limits for now, restaurants and bars already have lost one of their stool’s three legs. Without alcoholic beverage sales, the second leg is gone, too.

Concepts that include words like “temporary,” “modification,” “expedient” and “let’s throw this against the wall and see if it sticks” need to be considered. As I wrote on Facebook:

“If we’re at war, and if restaurants and bars are expected to bear the brunt of a calculated wartime strategy of ‘social distancing,’ then can they at least be allowed to use the weapons they already possess to stay alive, so they can continue to fight another day?”

I hope that Governor Holcomb will consider a short-term departure from the “everyday” that would allow us to serve the needs of customers for the duration of the war against coronavirus, as well as give us a statistical chance of surviving the conflict.

Holcomb should instruct the Alcohol & Tobacco Commission to temporarily suspend enforcement of Indiana’s bewildering carry-out alcohol laws, until such a time when restaurants and bars can go back to operating as they did before the crisis. Merely loosen up, temporarily. Existing permit holders know the rules, and the vast majority follow these procedures.

We aren’t newbies. We just don’t have a box checked on a sheet of paper.

Our patrons are accustomed to coming inside, hanging out, eating a meal and having a couple of beers. For an indefinite period, almost surely long after March 30, they can’t do this. Buying bottles and cans of beers and wine to take away with their food does not seem like a radical reordering of civilization.

I’m saving the most corona-vincing argument for last, because as it pertains to relaxing enforcement of an alcohol law or three to help keep us in the ballgame.

KENTUCKY
ALREADY
IS DOING IT.

That’s right. The Kentucky Restaurant Association lobbied Governor Andy Beshear for a measure of temporary rationality, and I’m told that by Friday 20 March restaurants will be able to sell carry-out beverages with food — only with food, which is a proper distinction, as are other qualifiers (package not draft, etc)that might be required.

I’ve written this in one sitting, straight through, and there’ll be mistakes. I understand perfectly well that my topic isn’t a priority, and nor should it be, which actually reinforces the simplicity of the point being made here.

It’s a tool (or a weapon, your choice) to assist us in carrying on as we carry out … calmly.

March 12: ON THE AVENUES: Keep calm and carry on.

March 5: ON THE AVENUES: I’ve got the spirit, but lose the feeling.

February 27: ON THE AVENUES: There is a complete absence of diversity among regular News and Tribune columnists.

February 20: ON THE AVENUES: For downtown New Albany, escaping reality might soon be a bridge too far.