On Monday (March 23) the governor of Indiana released two significant executive orders: 20-08 (Directive for Hoosiers to Stay at Home) and 20-11 (Relating to Carryout Consumption of Alcohol).

Restaurants and bars now have a chance to make more money from carryout during the coronavirus outbreak — as long as they don’t defy directives to keep their dining rooms closed.

Two of the four executive orders Gov. Holcomb issued on Monday deal with ensuring people stay away from each other and boosting local businesses crunched by restrictions meant to slow the spread of COVID-19.

Executive Order 20-10 enforces stiff penalties for establishments that continue to allow patrons to dine on their premises. Executive Order 20-11 relaxes the rules on carryout consumption of alcohol to relieve some of the financial hardship that specific alcohol permits could cause during the public health emergency.

It came as a mild surprise to me that draft beer in growlers was included in the easing. Future implications?

Later in the day the Alcohol & Tobacco Commission got on with the fine print. 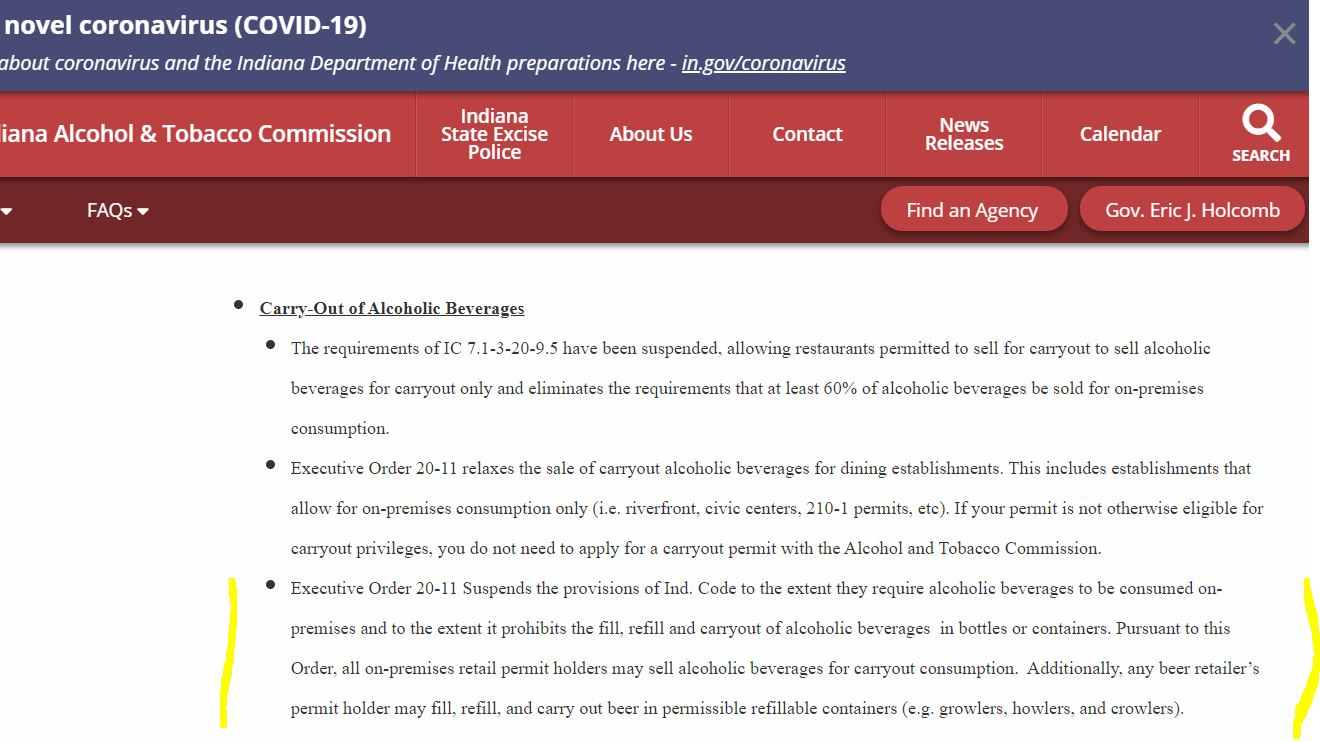 Ultimately there came a key clarification: Those establishments selling bottles, cans and growlers must do so inside their establishments; not for delivery, and no curbside.

This being Indiana, for the ATC to restrict carryout sales to customers walking inside the building seemingly contradicts the governor’s aim to keep them out in favor of curbside. The gist of Holcomb’s comments on Monday as they pertained to alcoholic beverages is that there’ll be zero tolerance for any establishment serving any product for on-premise consumption.

So, what does it all mean?

I think it all means that until March 31, and perhaps afterward if the order is renewed, establishments previously licensed to sell alcoholic beverages on-premise only, now enjoy the same privileges as others with the requisite carryout addendum.

They must make the transaction indoors, and it looks as if this dispensation extends to refilling growlers BUT after digesting yesterday’s various announcements, it also appears that enforcement by all agencies amid the newly loosened regime will focus on social distancing — those taped-off navigation channels and spaced X markings.

People coming inside to get a growler filled must wait. They probably should be instructed where to wait; it’s better for everyone’s safety AND the added benefit is a way for establishments to cover their butts. The state clearly is saying that businesses allowed to remain open will be “graded” by their compliance with social distancing. I suggest taking this seriously.

My hunch is the more taps installed, the greater interest in growlers on the part of retailers — and the ATC’s follow up post actually did specify “permissible” containers (growlers, howlers and crowlers). Obviously those restaurants now able to fill growlers probably don’t have any on hand; furthermore, filling incoming growlers brings us back to the possibility of unsanitary containers and potential enforcement activity by the health department.

Also this: Excepting growlers of beer, the alcoholic beverages sold have to be pre-packaged. We’re not being allowed to batch cocktails and serve them for carryout with a roll of toilet paper crowning the jug.

How all this plays out in terms of the wholesalers isn’t known to me at this time. I know they’re watching. I don’t know how quickly carryout sales will deplete existing stocks. The CDC says the coronavirus can live up to 24 hours on cardboard. We’re already sanitizing all incoming.

This is how I see the playing field today. However, we’re likely to witness numerous revisions and supplemental straitjackets as the days progress. Stay nimble, people.