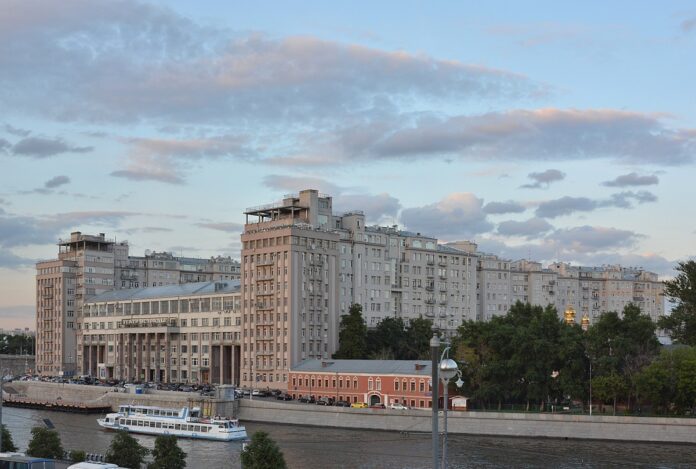 It’s been a year and a half since I read The House of Government: A Saga of the Russian Revolution, by Yuri Slezkine, described by its publisher as “the epic story of an enormous apartment building where Communist true believers lived before their destruction.” I found it interesting, indeed, and it inspired an educational digression about various palaces (see below).

Yesterday out of nowhere came a lengthy essay at Jacobin about Slezkine’s book (“The Making of the Soviet Ruling Class”), written by Kevin Murphy: “(He) teaches Russian history at the University of Massachusetts Boston. His Revolution and Counterrevolution: Class Struggle in a Moscow Metal Factory won the 2005 Deutscher Memorial Prize.”

This essay isn’t for everyone, but if you’re interested in early Soviet history, it’s informative.

The House of Government is the most contradictory, eclectic study of the Russian Revolution ever published. Brilliant, captivating, and often heart-wrenching, in many ways it is social history at its very best. Some of Yuri Slezkine’s harshest academic critics, who have only published obscure dust-collecting volumes, should realize that nothing comparable has been published in half a century. Slezkine should be commended for dedicating so many years of his life to producing an indispensable read for every serious student of the Russian Revolution.

But we also need to be honest about its flaws. The House of Government is a conceptual dumpster fire, framing what could easily have been an epic masterpiece into a predictable story that we’ve heard so many times before by putting forward a “continuity” thesis that relies upon a plethora of factual errors and omissions. Readers who can tune out the often exasperating analysis and treat it as unfortunate background noise will enjoy the ride.

Murphy uses a word we don’t see every day.

As a prosopographical study of how an important part of the party apparatus converted itself into a new ruling class, The House of Government fills a huge gap in the history of Stalinism, even if the author himself doesn’t view it in such terms.

Prosopography defined: “A description of a person’s social and family connections, career, etc., or a collection of such descriptions.”

Slezkine’s book and Murphy’s essay both make for heavy reading, but I’m glad I did. There’ll never be a time like that again … will there?

I suppose we’ll have to settle for … bottom left.

Time does not fly when you’re reading cornerstone-sized tomes, but in the middle of Week Seven, there’s light at the end of a humongous arched entryway in the building ostensibly being profiled: The House of Government: A Saga of the Russian Revolution, by Yuri Slezkine.

Sorry, CM Barksdale: the book’s about the people living in the colossal structure, not the bricks and mortar itself. In 1931, at roughly the same time this building was completed, the church down the way was demolished to make way for progress, Stalinist-style.

Cathedral of Christ the Saviour

… The original church, built during the 19th century, took more than 40 years to build, and was the scene of the 1882 world premiere of the 1812 Overture composed by Tchaikovsky. It was destroyed in 1931 on the order of Soviet leader Joseph Stalin. The demolition was supposed to make way for a colossal Palace of the Soviets to house the country’s legislature, the Supreme Soviet of the USSR. Construction started in 1937 but was halted in 1941 when Germany invaded the Soviet Union during World War II. Its steel frame was disassembled the following year, and the Palace was never built.

It never happened, and it was left to the Genius of the Carpathians, ill-fated Romanian despot Nicolae Ceaușescu, to erect the biggest damn Commie building of all — not cloud-piercing skyscraper, but the Palace of the Parliament (formerly House of the Republic).

Stalin may not have gotten his Soviet palace, but Ceaușescu got his, good and hard after a show trial (template: Koba).

Why Joseph Stalin Never Got His Soviet Palace, by William O’Connor (The Daily Beast)

… The final designs for the palace were terrifying. The structure was a pyramidal skyscraper made up of seven ascending concentric cylinders. Each of those hulking cylinders was to “be decorated with allegorical sculptures of heroes of the Soviet epoch.”

Crowning this monstrosity was no less than a 328-foot statue of the deceased Vladimir Lenin.

Work on the Palace began in 1938, with the government spending roughly $18.9 million to get it started. The Soviets declared that it would open on Nov. 7, 1942, the 25th anniversary of the Bolshevik revolution, leading even The New York Times to snicker and write, “The building cannot possibly be completed by that date.”

The base of the building was to be 460 feet in diameter. It would be filled with offices, museums, restaurants, and a main hall with a capacity of 20,000.

It was also to have 148 elevators and 62 escalators. According to Time there would also be a library with 500,000 books.

The base was to be made of marble and granite, the rest of the building clad in a purple-red tufa (a type of limestone) from the Caucasus, and the statue would be made of aluminum or chrome steel.

Due to its height up in the clouds, engineers “estimated that on only ninety days out of the year will the head of the Lenin statue be clearly visible from the ground.”

The foundations were completed and the steel frame for the lower levels put in place, but alas, WWII got in the way. In 1942 the steel frame was dismantled to provide steel for the Red Army and more urgent infrastructure projects.

As a point of comparison, note that a 328-foot tall statue of Jeff Gahan would be taller than Riverview Tower, which is merely ≈ 190 feet.