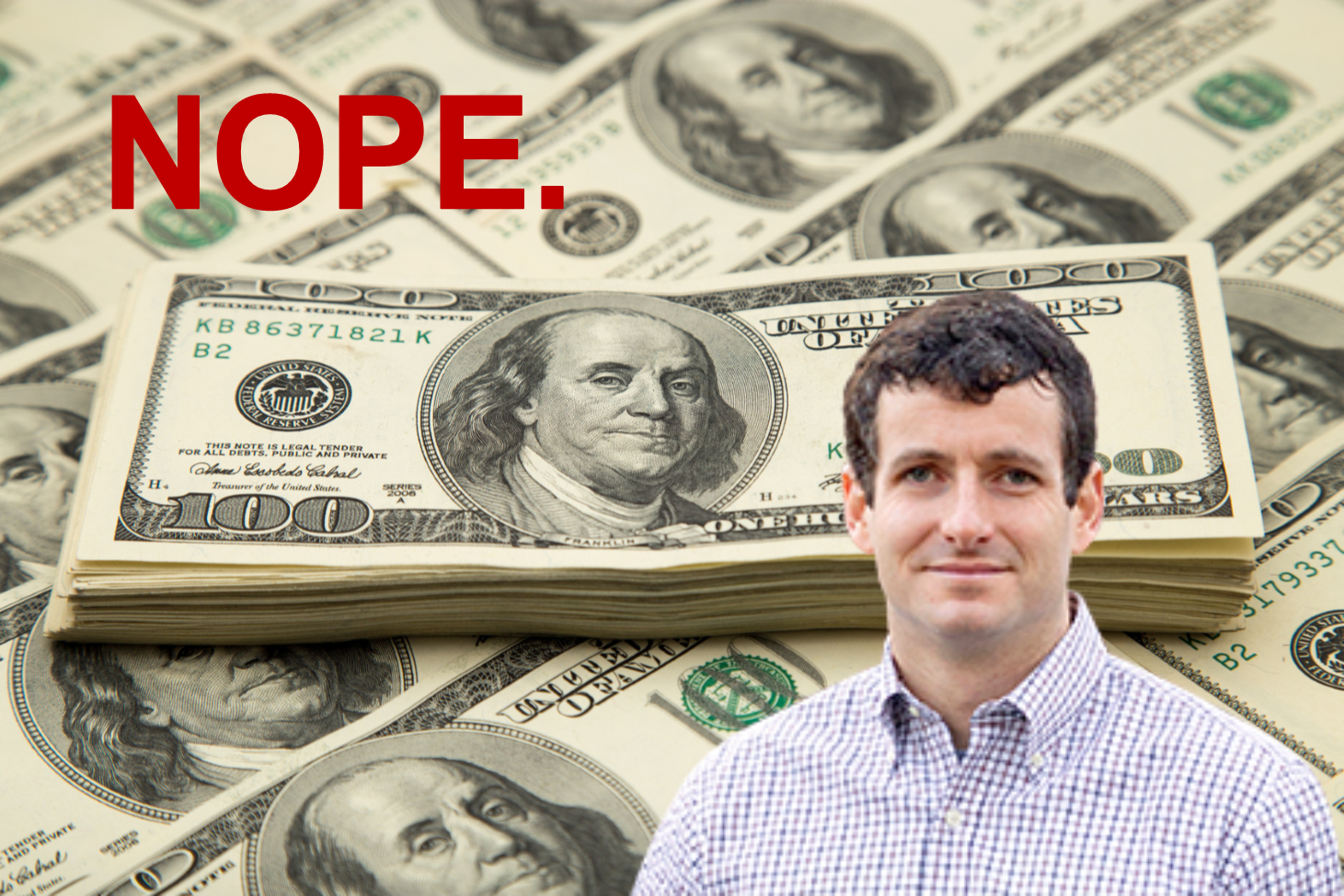 Originally published here on October 14, 2018; we’re revisiting Hollingsworth’s cash-engorged inhumanity because of this:

Dining on the poor, part two: Trey “Big Boy Pants” Hollingsworth reminds us that capital accumulation comes before YOUR life.

As borrowed from Facebook (sorry; the source has been lost — is it you, Dan Canon?), this profile effectively rests the case. It remains that I have significant issues with the Democratic dumb-ocracy, but voting in favor of Hollingsworth isn’t something I plan on doing in this or any other lifetime.

This is a profile of Joseph Albert “Trey” Hollingsworth III, the biggest goober in Washington.

As his name might lead you to suspect, he has been rich since before conception. His father, Joe Jr., is a prominent Tennessee capitalist who, in addition to owning “the largest developer for semi-rural industrial property in the Southeast,” [1] is known for an “adventuristic nature” that “expands beyond taking risks with start-ups, stocks and investments” to “hang gliding in Rio de Janeiro, racing Formula 1 cars and deep sea fishing off the Great Barrier Reef.” [2]

But Trey overcame his hardscrabble upbringing and in 2005, at the age of 22, founded Hollingsworth Capital Partners, which “purchases, renovates and repositions underperforming industrial and distribution investment property throughout the nation.” [3] His daddy is a silent partner.

A decade later, Trey decided to move to Southern Indiana and buy himself a seat in the US Congress, furnishing his campaign with over $3.1 million of his own money — 88.4% of the total amount raised by the Hollingsworth 2016 effort. This was supplemented by $1.5 Million that the Hollingsworth Companies donated to Indiana Jobs Now, a Super PAC his father created for the sole purpose of getting Trey elected (and which he terminated weeks after achieving this goal). Mostly, this fortune went to TV ad buys, which were enough to marshal 34% of the competitive Republican primary vote, securing Trey the opportunity to face a Democrat in Indiana’s gerrymandered 9th District. Then, he rode the anti-Clinton wave straight to Washington, DC.

(Campaign finance epilogue: At the end of the race, Trey still owed the strangely repetitive sum of $246,246 to his pollster and other political consultants, so he, of the nearly $60 Million asset portfolio, asked his colleagues for help paying up. “Representative-elect Hollingsworth,” said a senior campaign adviser, “is extremely appreciative of those willing to help retire campaign debt that is owed to vendors.”) [4]

My favorite detail about his 2016 run is his approach to the press, summarized neatly in this excerpt from a profile in Slate: “The 9th District… doesn’t have much local media, and Hollingsworth frequently dodged what media there was. When he did agree to interviews, he often evaded, even on seemingly benign questions. He declined to release his tax returns. When someone asked him to name his three favorite Hoosiers, he declined to do that, too. One reporter asked him where he’d lived before moving to Indiana; ‘I’ll have to go back,’ Hollingsworth said, speaking about his own life, ‘and check the record.’ Pressed on when exactly he moved to Indiana, he finally answered with early summer. Another reporter tried to clarify whether that meant June or July. ‘I think that’s a good characterization,’ Hollingsworth said.” [5]

In his 22 months in Congress, Trey has maintained this demanding level of constituent accountability, appearing in zero public in-district town halls since being sworn in. His sacrifices in the name of transparency reached their peak one week at the end of 2017, during the fight over the Free Millions for Billionaires Bill, or as it was more commonly known, “tax reform.”

One provision of the initial draft of that bill would have taxed tuition remissions, which low-wage graduate students receive, as income, meaning workers earning roughly $15,000 a year would be taxed as though they were earning around four times as much. Indiana University being the largest employer in the district, Trey’s constituents did not all smile on this prospect. Specifically, on the evening of Monday, December 11, Campus Action for Democracy grad students staged a sit-in in his office in Greenwood, demanding to hear from Trey.

Rather than call and speak to them, Trey and his DC-based security chief issued two instructions: 1) that the building manager allow the protesters to stay in his office, but have the police restrict them from going into the hall, where the bathrooms are, and b) that his pregnant staffer supervise the student demonstrators for as long as they continued the occupation. So, as the occupiers explain in this video [6], they spent hour after hour with no access to bathrooms or contact with the outside world, never quite managing to get arrested for the cause.

Four days later, on December 15th, the Scott County Chamber of Commerce announced a Koch Brothers-sponsored “Tax Reform Town Hall” [7] with Trey. It was open to the public, with a few minor provisos: 1) Attendees had to register that very day on Eventbrite, 2) The Eventbrite link didn’t work, 3) The Town Hall was to take place in three days, on a Monday, 4) at 8 o’clock in the morning, 5) one week before Christmas, and 6) in the tiny town of Scottsburg. (Scott County, of which Scottsburg is the seat, gained some notoriety years earlier when then-Governor Mike Pence closed the local Planned Parenthood clinic, the county’s only site for HIV testing. [8] When, two years later, the worst HIV outbreak owing to needle-sharing in US history broke out in Scott County, Pence took three months to permit a temporary needle exchange, in which time nearly 200 Scott County residents were notified of an HIV-positive diagnosis.)

How did the Town Hall ultimately go? Citing a mysterious “threats of violence,” Trey cancelled the event. [9] A spokesperson said that, on the recommendation of Capitol Police, they would not release any details. That very same day, I swear before God, he posted on Facebook that, due to a fire in the building, the Greenwood office — which students had occupied precisely one week earlier — would be closed for re-construction until January 3rd.

The fire’s devastation was evidently total: no one survived to manage to get it reported in the local paper.

In the end, Trey voted for the Free Millions for Billionaires Bill, and made out like a bandit, handing himself $4.5 Million via the law’s “Pass-Through Tax Deduction” — more than any other Member of Congress. The Grad Student Tax was removed from the final bill, and I wouldn’t blame you if you didn’t believe me that he personally called Tracey, the lead organizer of Campus Action for Democracy, to explain how hard he had worked to strike that unconscionable provision.

At this point, a lot of people have noticed that Trey spends about as much time in Indiana’s 9th, now that he represents it, as he did a couple years back, before he moved to it. Liz Watson, his Democratic challenger, has repeatedly invited him to a joint candidate forum, as have several non-partisan press outlets and organizations, including Hoosier Action and Campus Action for Democracy. Citing whatever and also this other thing, he has declined these invitations.

In the Republican Primary this year, a man named James Dean Alspach challenged Trey. He did not campaign. He barely posted a website. [10] His team, whoever they were, stapled up a bunch of lawn signs that said “James Dean” and showed his face. “If I win this primary,” he told WLKY News Louisville [11], “I’m going to announce my intentions to run for President as James Dean.” Detecting the interviewer’s confusion, Dean clarified: “So my whole focus in the Congress is to legislate for my Presidency.” He got nearly a quarter of the vote.

Trey is vulnerable, especially because he is facing an unusually strong candidate in Watson, a labor attorney who wrote the federal legislation on a $15 minimum wage, a staunch supporter of Medicare for All, and a friend to Pramila Jayapal, Bernie Sanders and around twenty labor unions. Her campaign has been so impressive — raising over $1 Million, with nearly 50,000 contributions averaging under $40 — that the DCCC added Indiana’s 9th, which Trey won by 14 points and Trump won by 25 — into its “Red to Blue” class of swing seats.

In collaboration with the Working Families Party, Hoosier Action is running an independent expenditure on her behalf. Between our work, Watson’s strengths, Trey’s weaknesses, the mood of the country, and Sen. Donnelly’s rise in the polls, I think we might just be able to scale this immense mountain of a political effort and unseat the biggest goober in Washington, Joseph Albert “Trey” Hollingsworth.