With a nod from infectious disease experts, who say it’s more difficult to contract COVID-19 in outdoor spaces (with proper social distancing) than inside, the mayor of Vilnius, Lithuania concluded that his city should become one “big open air café,” and early results are promising.

Even Greg Fischer is paying attention as he flees responsibility for the latest instance of LMPD misbehavior.

Many of us can see the merit in similar notions, molded to the peculiarities of New Gahania, where we don’t have an open container law and the Indiana ATC is showing unprecedented signs of tolerance about altering floor plans to include outdoor seating.

A friend observed: “Why not close downtown streets to vehicular traffic every evening Tuesday through Friday and all day Saturday to allow for outdoor dining and farmers market activity, which would also support retail?”

The devil consistently resides in the details, but there would be definite possibilities of this sort … alas, if not for the stupefyingly predictable automobile-centrism of Jeff Gahan’s motorheaded City Hall.

As when Dear Leader nods dully, eyes vacantly staring into space, while the state of Indiana doubles down on the Sherman Minton Bridge repair work, then wobbles off to supervise the painting of gigantic automobile murals on the parking garage.

It simply has to be a variety of sexual fetish, this need to chop down trees and breathe exhaust fumes.

But maybe Mayor Gahan is in need of an intervention. He seemed even more morose in this week’s ceremonial ProMedia video. Is he okay?

Depression is a very real consequence of crises like ours, and with Indiana’s GOP leadership okaying an aggressive economic reopening program, Gahan is even more isolated than before, unable to get past creatively remixed gurgling sounds in response. He might have applied his own timetable, although this would require having one.

Earlier this week City Hall pulled the plug on its reimbursement-for-restaurant-employee meal plan. It probably helped a little bit, but Holcomb’s timetable removed the need for Gahan to cling to his self-congratulatory $30k symbolism.

Expect the nickel-and-dime chicanery to continue as the pandemic’s implications for the city’s budget grow ever more obvious, not to mention incapable of being explained away via by-the-numbers propaganda videos.

Hilariously, the Democratic majority on New Albany’s city council has decided to suppress transparency even further with a proposal to limit council meetings to a single monthly session (thanks Diane for the visuals). 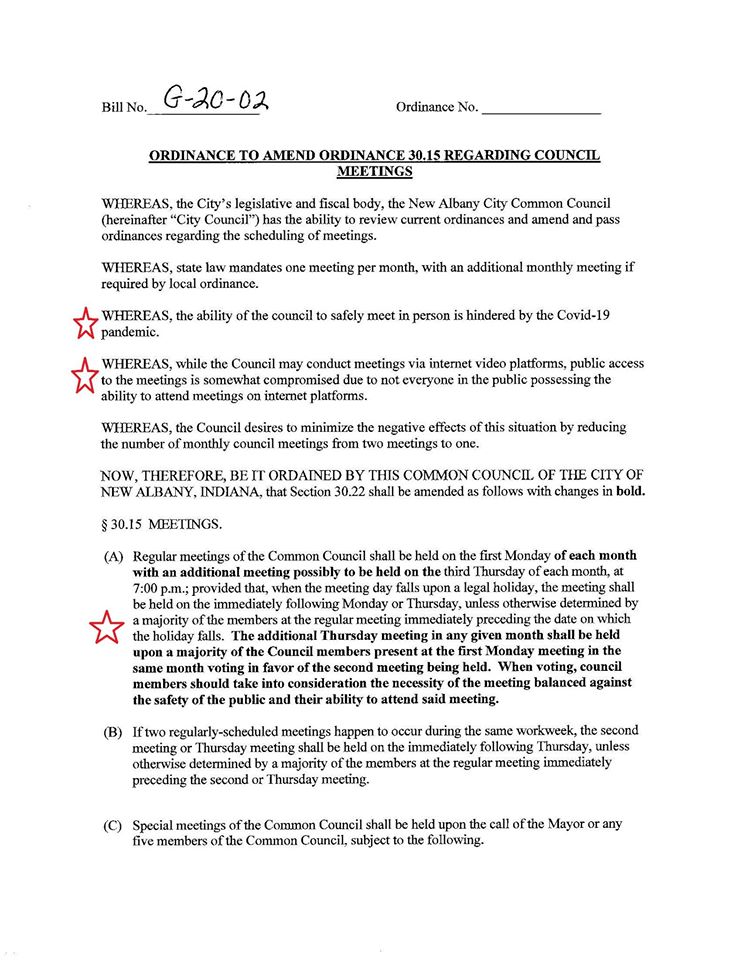 And just look who is introducing this measure to reduce the council’s work load at precisely the same rate of pay as before.

Allow me to repeat: for so long as Gahan’s jury-rigged budget was copacetic, those were HIS numbers, but when the feces hits the fan, these five DemoDisneyDixiecratic city council members will learn that it’s THEIR budget, and they’ll be sacrificed faster than Donald Trump can wolf down a Whopper.

One meeting a month?

Yawn. Can you let me know when our bootlicking council Gahanites decide to give back half their pay packets?

You know, unanimity, like when the 3rd Plenary Session of the 11th Central Committee of the Communist Party re-elected Chairman Mao yet again without a single dissenting vote. As a friend put it after reading this letter, “our Adam isn’t exactly Abe Lincoln at the word processor, is he?”

Adam’s words got to me, right here … in my big toe, the one where the gout lives.

The word “Kremlinology” (archaic usage) refers to “the study of the policies and practices of the former Soviet government,” so called because these actions took place largely within the walls of the Kremlin in Moscow, where transparency was about as common as telling obscene jokes about Stalin’s parentage — to his face.

Experts in Kreminology looked forward to the USSR’s annual May Day parades, where the assembled VIPs standing atop Lenin’s Mausoleum to watch the missiles roll through Red Square gave clues as to who was in, and who wasn’t. Whichever colorless, originality-free Politburo member was standing next to Brezhnev yielded bountiful clues about the succession, as opposed to a greater degree of anti-social distancing, with Siberia being an ultimate destination where a disgraced appointee could put 60 miles between himself and another prisoner.

Ergo the first salvo in the the mayoral race for 2023 has been glimpsed, and it’s … Jason Applegate, who is the focus of this local chain newspaper article provides clear evidence that he’s ahead of those other functionaries wearing furry caps and leaning unsteadily against the moldering walls of Bob Caesar’s backyard garage.

And what of a fourth term for His Highness?

Won’t happen, suggests the Green Mouse. A cushy job with HWC Engineering awaits, and besides, two pensions are better than one. The minions can clean up the mess, right?

Even better, just blame it on county government — right, Slick?