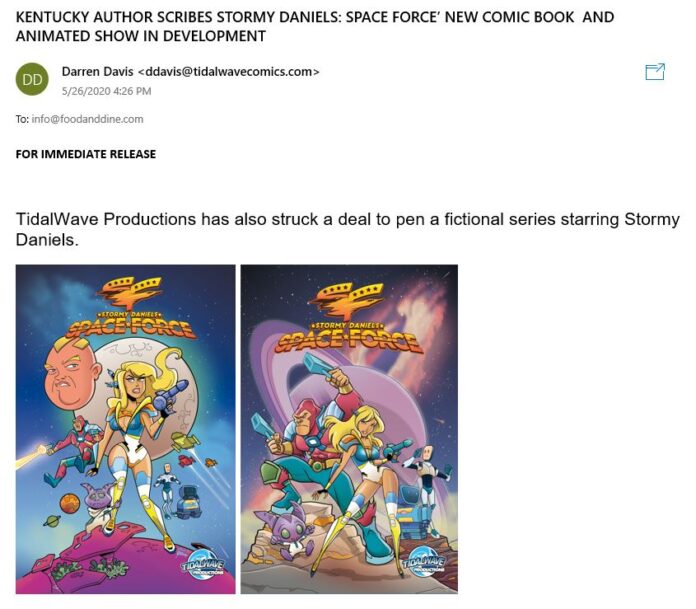 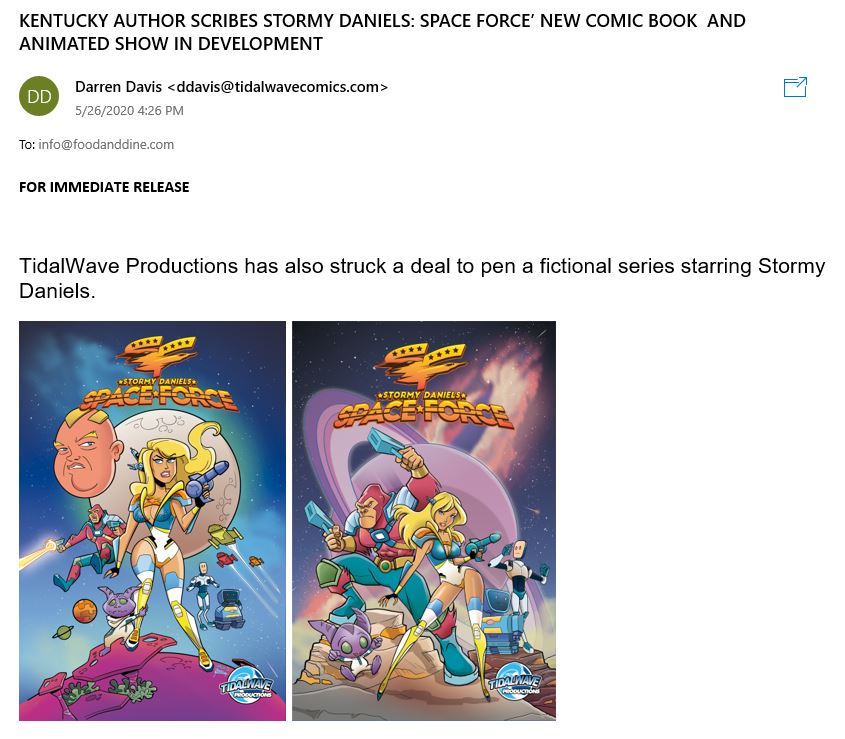 As George W. Bush is reputed to have said: “That was some weird shit.”

The funny thing to me is that they arrive quite seldom at my actual request. During NABC times, they were about craft beer and various essential gadgets or get-craft-quick schemes. NA Confidential has generated its share, and these days all the bots have learned about my “digital editor” job title at Food & Dining Magazine.

However, this one takes the proverbial cake, having absolutely nothing to do with anything I do.

It must be experienced in its entirety for maximum impact and cranial, er, penetration.

This fall, TidalWave will develop a fiction comic book series with Daniels called “Stormy Daniels: Space Force.” Captain Stormy Daniels commands the Helix, a starship serving the United Republic of Earth and its leader, “very stable genius” OrDon. Daniels and her crew – capitalists at heart – are for hire. It is Barbarella-meets-Star Trek-meets-Stripperalla in a racy comedy, action and adventure series starring Daniels.

“I have joined forces with to create this comic and TidalWave has been so generous with allowing my input”, said Daniels “ I could not be happier with the outcome. Bonus is I get to add badass comic book character to my resume.”

“We are excited to be teaming up for this far out adventure with Stormy”, said TidalWave publisher Darren G. Davis. “We have not just created a fun comic book but a brand that will include action figures and an animated series”.

The Bohemia Group will be developing this into an animated series. “Working with Darren is always an adventure and this one may be one of my favorites. How often do you get to turn a situation like what happened with Stormy Daniels into a superhero! I am very excited to see where this one goes and happy to have Bohemia Group apart of it!” said CEO Susan Ferris from the Bohemia Group.

Released last week was a NEW and updated comic book biography on Stormy. “Female Force: Stormy Daniels” was created in conjunction with Daniels, who wrote the foreword to the book and edited the story herself. The book features new material, bonus images and an ending that is sure to please those who love stories written to empower and inspire.

Print copies of the biography comics are available on Amazon. Digital versions are available from iTunes, Kindle, Nook, ComiXology, Kobo and wherever e-books are sold.

Please feel free to use the images and credit TidalWave Productions. To download some PDF’s and covers click here:
https://bit.ly/3ejbPvV

Interview opportunities are available upon request.

For more information about the company, visit www.tidalwavecomics.com

TidalWave is a multifaceted multimedia production company with the mission of delivering dynamic storytelling in a variety of forms by developing graphic and literary fiction and nonfiction, audio, film and more. The company’s wide range of diverse titles delight readers through its creative and innovative storytelling available in high-quality print and electronic formats.

TidalWave delivers a multimedia experience unparalleled in the burgeoning graphic fiction and nonfiction marketplace. Dynamic storytelling, coupled with groundbreaking art, delivers an experience like no other. Stories are told through multiple platforms and genres, gracing the pages of graphic novels, novelizations, engaging audio dramas and cutting-edge film projects. Diversity defines TidalWave’s offerings in the burgeoning pop-culture marketplace through its use of fresh voices and innovative storytellers.

As one of the top independent publishers of comic books and graphic novels, TidalWave unites cutting-edge art and engaging stories produced by the publishing industry’s most exciting artists and writers. Its extensive catalog of comic book titles includes the bestsellers “10th Muse” and “The Legend of Isis,” complemented by a line of young adult books and audiobooks.