I was working on this post when a notice from my former business popped up on social media feeds. 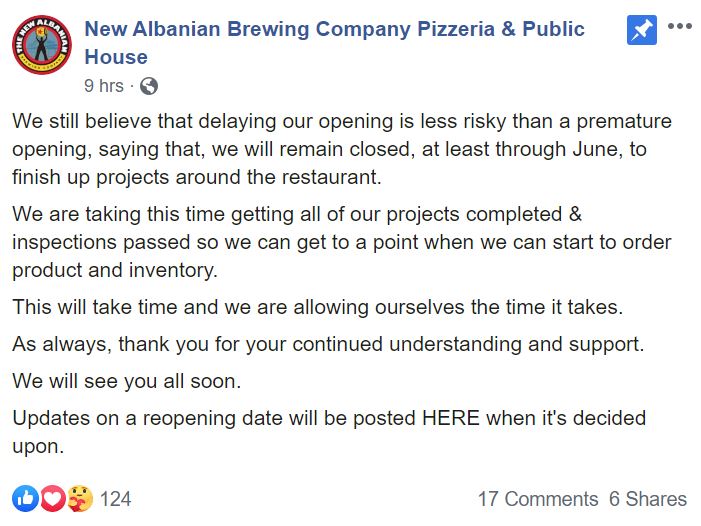 Pints&union will return next Tuesday, June 9. In exactly what format is, as yet, unknown.

I know it’s frivolous to be writing much of anything without acknowledging the Black Lives Matter protests taking place in Louisville, just a few miles from my house. To me they’re entirely justified protests, and government’s response has been horrendous. Mayor Greg Fischer is underwater, and should resign.

This said, it has been utterly fascinating to see which local food service operators have spoken up about the protests — during which admired BBQ chef David McAtee was killed by police — and which have continued hawking their wares on the street corner as though nothing important was occurring, just as they were doing following the pandemic reopening period, as though science had been a ghastly imposition the previous months.

By the way, it may surprise you to learn that COVID-19 did not agree to take a holiday amid the unrest.

Yes, there is a considerable schism within the ranks of local restaurateurs. It was there before, albeit more hidden than not, and kept in check by commonalities and shared experiences. There always were narcissists on one-side and the public minded on another; the coronavirus then pulled back the curtain, and now protests for simple human injustice have sealed the deal.

And yet, in spite of it all, I retain a certain loyalty to the segment, if not some of the less defensible bad actors populating it. I’m not “outing” anyone; they’ve outed themselves, and I’m confident that lots of folks who “get it” can “see it” clearly without me pointing.

However, speaking for myself alone, it’s just not going to be possible for me to be close with some of them any longer. It’s going to be difficult for me to patronize them. I intend to keep it to myself, but some of the shrillness and superstition masquerading as public health (and justice for all) have been repugnant.

History sometimes offers us the chance to stand up and be counted. Some restaurateurs are seizing this moment, others not so much. I wish there weren’t a scorecard now, but it’s there. I can’t NOT look at it.

My friend and boss Joe Phillips is on the right side of history.

Why some restaurants are keeping their doors closed in states that have reopened, despite backlash, by Ashlie Stevens (Salon)

“I have a huge problem with people choosing profit over people. And I would rather go bankrupt”

At Pints & Union, a pub in New Albany, Ind., a skeleton crew readies for a rush of Saturday evening to-go orders. Save the sounds of that kitchen prep, it doesn’t feel much like a restaurant anymore. The smell of beer has been replaced by the smell of bleach, while the wooden booths have long been sanitized and subsequently covered in plastic. Occasionally, a pedestrian tries to open the bright red front door —rattling it against its navy frame — but it’s been locked for weeks.

Takeout orders are now called into the restaurant and paid for via phone; once they are ready and the customer is outside, only then is the door briefly opened by a masked and gloved employee who places the carryout bag on a small table nearby to be retrieved.

According to owner Joe Phillips, this is the way Pints & Union is going to operate for the foreseeable future as a way to prevent the continued spread of the novel coronavirus. This is despite the fact that Indiana Governor Eric Holcomb cleared all restaurants in the state (save those in three “hotspot” counties: Marion, Lake, and Cass) to open at 50% capacity as of May 4.

“There’s a lack of testing in southern Indiana,” Phillips said. “There’s only one place you can get tested locally — it’s the health department — and it’s only open on Saturdays from 11 to 1, and you have to have symptoms. So no one is getting tested.”

However, in late March, the chief medical officer at Baptist Health in New Albany called Floyd County, in which the city is located, a “hotspot for the coronavirus” after over 20 people tested positive.

The amount of unknowns about the virus and its spread is, Phillips said, his largest deterrent against reopening.

“I have a huge problem with people choosing profit over people,” Phillips said. “And I would rather go bankrupt.”