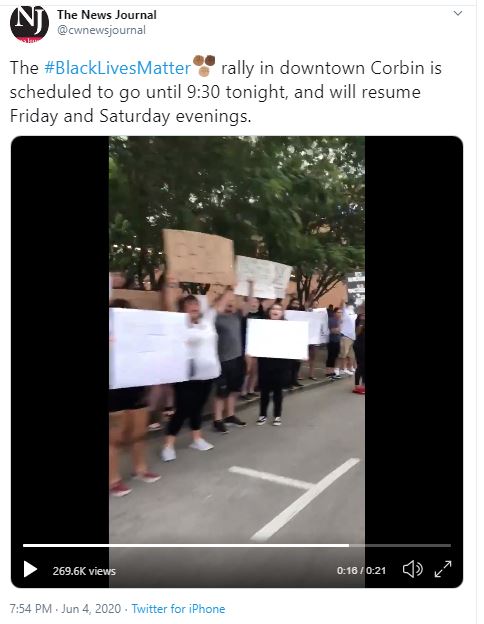 Good job, Corbin, Kentucky. By the way, do any of the pretend-progressives in Nawbany have a pulse?

Why The Small Protests In Small Towns Across America Matter, by Anne Helen Petersen (Buzz Feed)

People who’ve watched and participated in the Black Lives Matter movement say that this time feels different. And the prevalence of these small protests is one of many reasons why.

… All over the country, people are showing up — often for the first time in their lives — to protest police brutality and injustice. In tiny ag towns like Havre (Montana) and Hermiston, Oregon, but also in midsize cities Topeka, Kansas, and Waco, Texas; on island hamlets (Friday Harbor, San Juan Island; Nantucket, Massachusetts; Bar Harbor, Maine); and in well-to-do suburbs (Lake Forest Park, Washington; Darien, Connecticut; Chagrin Falls, Ohio). They are showing up at the courthouse. They are kneeling and observing eight minutes of silence — a reference to how long Floyd was pinned to the ground in a knee chokehold by the Minneapolis police officer who was later charged with his murder. They are marching down interstates and waving signs on street corners. Sometimes, like in the town of Alton, New Hampshire (population 5,335), where one woman organized a protest just two months after being hospitalized with COVID-19, only seven people come. Sometimes, like in Sioux Falls, South Dakota, there are thousands …

… There have been protests in Belfast, Maine. In Farmington, New Mexico. In Tuscaloosa, Alabama. In Bentonville, Arkansas. In Lubbock, Texas. In Idaho Falls, Idaho. The biggest anyone can remember in Paducah, Kentucky, in Bozeman, Montana, in Pendleton, Oregon, in Frisco, Texas, and in Ogden, Utah. In Tacoma, Washington, pastors knelt in the rain, pleading with God. In Bowling Green, Kentucky, three rolling days of protests. In Owatonna, Minnesota, a student-led protest lasted for 10 hours. In Tulsa, Oklahoma, thousands gathered on the 99th anniversary of the Tulsa Massacre. In Myers Park, one of the wealthiest neighborhoods of Charlotte, North Carolina, where black people were prohibited from owning property for decades. And in Petal, Mississippi, where protesters have spent days calling for the resignation of Mayor Hal Marx, who tweeted last week that “If you can talk, you can breathe” …

Here in the campaign finance paradise of New Gahania, we don’t care shit for no damn revolution, because it’s street sweeping season!

To which I answer:

Street “sweeping” should not be expanded. It should be ended. The physical process of “sweeping” is largely futile, and there is no United Nations storm water “law” stipulating dust cloud creation as a workable corrective to anything. Genuine drainage impediments like leaves and garbage barely are addressed by “sweeping.”

Until you’ve seen the townies on their front porches chasing Hostess doughnuts with iced tea and waving at the street sweeper drivers, you’ve no idea why people like Bob Caesar are elected to office.

ASK THE BORED (IN EXILE): It appears that street sweeping is suspended through April 7, although it should be eliminated altogether.

But there’s more: The 4th of July on the 3rd of July is postponed!

Nope. There’ll be no waves of orange coursing through the streets this October, because New Albany’s civic celebration also has fallen victim to pandemic public health logic. A very tough call for the committee, but absolutely the correct one.

And, there was a primary election and less than 25% of us bothered. This being a presidential year, the voter turnout percentage will increase tremendously in November, and Donald Trump probably will win Floyd County again.

In the interim, the big news out of the primary was the NA-FC school corporation’s safety referendum defeat, by a margin of around 5%. Consequently, let’s get something straight: Black Lives DO Matter, the COVID pandemic is absolutely real, street sweeping is a horrendous boondoggle, and Van Hagar was better than Van Halen.

Taking all this into consideration, do you really believe the Green Mouse has anything to say at all in the nature of a post-mortem about the referendum?

That’d be plain dangerous. Following are a few headlines.

What budgetary crisis? Nawbany nickel-and-dimes 50K for the homeless, then awards $2.2 million in tax abatements for Sazarac NOD.

Councilman Phipps’ future council meeting emergency reduction resolution is another Team Gahan mess. Can it be tossed out with the rubbish?