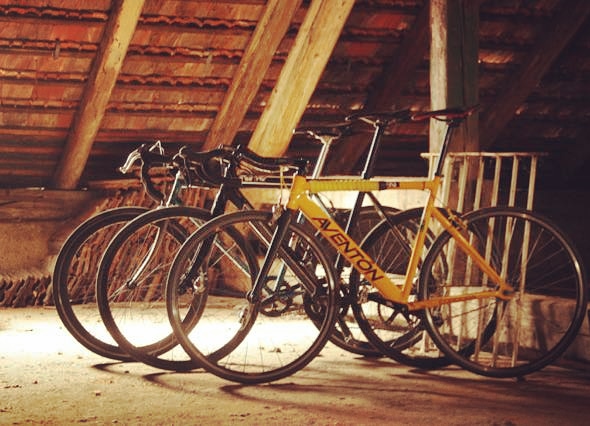 At Good Housekeeping: Transform your go-to dumping ground into a clutter-free zone.

PLEASE READ NO FURTHER UNLESS YOU WISH TO CONSIDER A REASONABLE, DISPASSIONATE DISCUSSION ABOUT MULTI-MODAL TRANSIT, ESPECIALLY BICYCLES. THANK YOU.

Now let’s talk about the latest greenway extension press release from the municipals, as forwarded by the local chain newspaper: New Albany proceeds with next stage of greenway design.

Before you read the pull, know that to have surveyed the goings-on by the municipal higher-ups for the past decade or more is to see that when it comes to their attitude toward bicycles, it’s as if none of them have ever been to a place in America or abroad where people use bicycles to commute and achieve actual useful tasks (as they would driving a car), as opposed to using bicycles strictly as recreational conveyances — often, loading a bike onto a car and TAKING it somewhere else to ride.

In functional bicycle-friendly cities, the idea is to connect one’s front door to a safe path to food, drink and a haircut as well as the recreational pathway.

Why do you think almost all the useful bicycle infrastructure was stripped from the Speck plan? The movers and shakers either don’t understand, or they do understand and have made the conscious decision not to pursue genuinely multi-modal transport options. I tend to think they simply don’t comprehend, because if they did, don’t you think reality would reflect just a wee bit of it by now?

Let’s read about the Democratic Party’s plans for partial modernity.

Basically, the idea is to extend the Greenway to the little pocket park where people can park their cars next to Silver Creek. A quarter-mile, maybe?

It won’t serve any constructive purpose as it pertains to people using bikes to connect from neighborhoods to the center, presumably because this would inconvenience drivers.

If there’s another reason why they do these things, I wish someone would explain it to me instead of refusing to discuss it.

Note the quote from Adam Dickey about connecting bicycles to Clarksville via projected sidewalks. You know, where bicycles are NOT SUPPOSED TO BE in the first place. They’re supposed to be on the street … where we won’t make it safe for people outside their cars. And yet Dickey adds that future plans should include provisions for walkers, not bicycles.

Automobile supremacy has us by the gonads, doesn’t it?

… “This part called Silver Creek Landing not only expands northward up Silver Creek, but it also opens Silver Creek up to recreational use,” (redevelopment’s Josh) Staten said.

Commission member Adam Dickey said the Clarksville Town Council has expressed interest in improving sidewalks along Providence Way, which could further improve safety and accessibility to the greenway.

He added that New Albany’s prior work on the greenway allows the city to explore additional connectivity to the pathway in the corridor.

“This is going to put us in a great position because no one else has moved up to Silver Creek, and I think this puts us in a leadership position,” Dickey said.

New Albany City Councilman Jason Applegate, who is also a member of the commission, emphasized the importance of opening up the greenway to other neighborhoods. He said safety is also a vital component of accessibility, and Dickey added the city should ensure that future roadway design centers around complete streets that allow for pedestrian use.

“We see the greenways being used so I think connectivity is so important,” Applegate said.