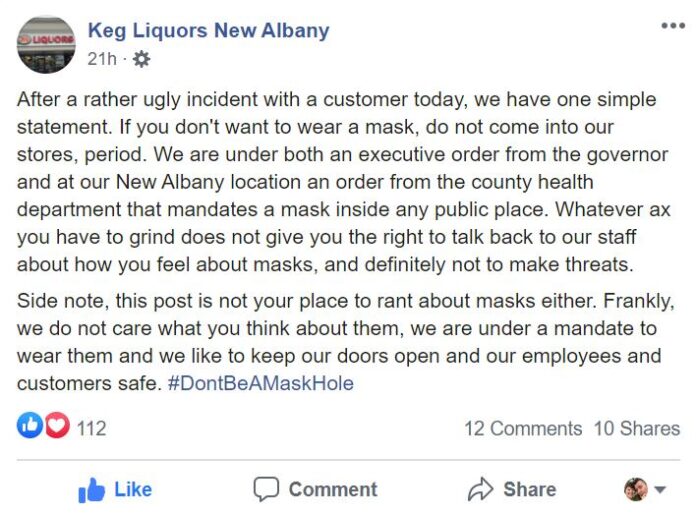 There’s a reason for #DontBeAMaskHole. 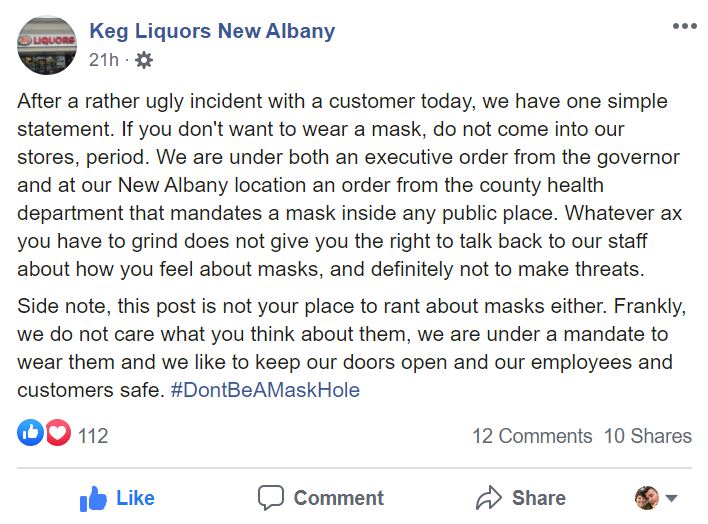 I’ve said all along, and will now repeat, that it’s the ultimate in despicable governmental cowardice to “encourage” face masks, but to allow retail workers to do the dirty work of enforcement.

A restaurant subject to health department guidelines regarding hygienic standards, generally now including face masks, must obey (and most are aboard) or face sanctions. Meanwhile elected officials from BOTH major political parties see no issue with issuing unenforced mandates leading to ordinary workers being compelled to act as police on behalf of spineless politicians.

It’s bullshit, and it needs to stop. I live in a place called New Albany, Indiana, and the unmitigated, calculating drivelers currently serving in elective office here can be the place where rationality begins.

Fed up with anti-maskers, mask advocates are demanding mandates, fines — and common courtesy, by Marc Fisher

… In a country stumbling to control a rampant and deadly virus, masks are effective and popular weapons. Three-quarters of Americans favor requiring people to wear face coverings in public to stop the spread of the novel coronavirus, including 89 percent of Democrats and 58 percent of Republicans, according to an Associated Press-NORC Center for Public Affairs Research poll in July.

Now, with the nation reeling from more than 5 million infections and nearly 170,000 virus-related deaths, a rising sense of outrage is leading this silent majority to push back against the smaller but louder anti-mask contingent.

Instead of flashy protests and confrontations, however, mask supporters are expressing their exasperation in quieter ways, writing letters to local newspapers, posting on social media, patronizing businesses identified as mask-enforcers on dedicated Facebook groups and urging state and local officials to mandate mask-wearing in public.

So far, 34 states and the District have adopted mask requirements. Now, mask advocates want police to enforce those orders, a move some police chiefs have said they are reluctant to make. They are seeking legal protection for retail workers put in the awkward position of enforcing mask rules. And they are lobbying for a coordinated federal mask policy …