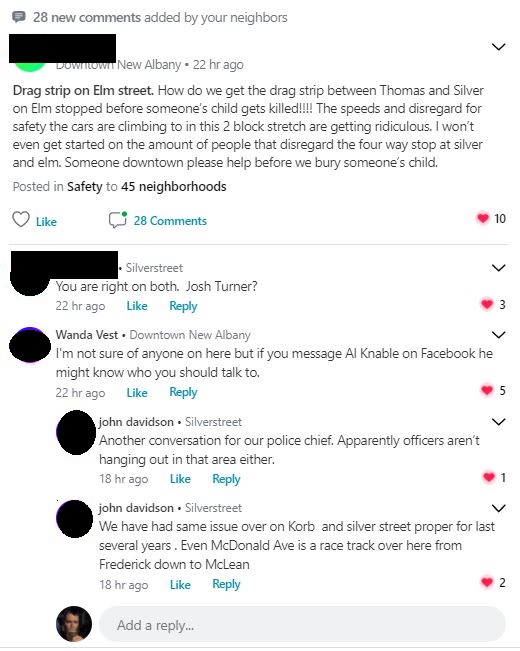 I seldom visit Next Door, but here and there it’s an informative resource, as when a well-attended thread began under the title of “Drag Strip on Elm Street.”

The last time I recall this topic being raised by elected and appointed officials was in late June, when city council discussed speeding and other examples of forever escalating driver mayhem in New Albany.

The council’s discussion was followed by a revealing intervention by the Board of Public Works and Safety’s appointed chairman Warren Nash, who hastened to remind elected public officials that there was no need to discuss problems that don’t exist.

But don’t take my word for it. After all, I don’t attend meetings any longer, in an act of self-censorship explained in depth here: ON THE AVENUES: Surrender.

Rather, believe Daniel Suddeath of the News and Tribune, who quoted Nash on June 23.

NEW ALBANY — Last week, the New Albany City Council kicked around a few ideas for traffic calming, though the only decision reached was to convene a committee to further explore the issue.

On Tuesday, Warren Nash, president of the New Albany Board of Public Works and Safety, urged the committee and council to be cautious in its approach due to a major improvement project slated to begin next year on the Sherman Minton Bridge.

“I hope your committee will take into account the Sherman Minton Bridge construction during the next two years and not do anything too drastic during that time,” Nash said to Councilman Jason Applegate, chair of the traffic committee that was scheduled to meet Tuesday evening for the first time since the pandemic.

Applegate regularly attends the board of works meetings, which will resume being held in-person likely on July 7, and explained that the committee’s intent isn’t to propose massive projects or to attempt to overstep its bounds.

The board of works oversees city streets as part of its domain while the council is primarily in charge of funding and managing municipal budgets.

Applegate said the committee would like to see a process streamlined “that gets information in kind of a systematic way where maybe there’s a liaison between the council and the board of works on these types of issues.”

The board of works is a three-person body and its members are appointed by the mayor.

Nash referred to the council’s discussion Thursday about speeding and traffic calming. He said he heard several issues raised regarding streets that the board already has projects planned for or where upgrades are in process.

He mentioned some traffic-calming measures and upgrades for Grant Line Road, Mount Tabor Road, McDonald Lane and Slate Run Road, among others.

“We’ve done traffic calming and slowed traffic down on all of those streets, so I think we’ve done a considerable amount of slowing traffic down,” Nash said.

If I’ve misinterpreted Suddeath’s quote, I’m open and eager to be corrected.