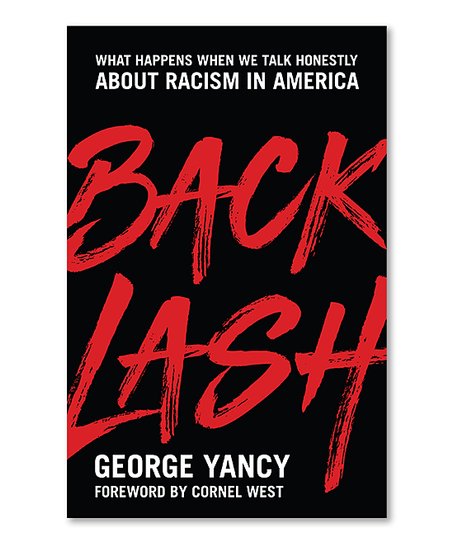 I’ve made reference to George Yancy’s Backlash on more than one occasion of late. Following is a link to coverage from 2018, when the book was published.

Is white America ready to confront its racism? Philosopher George Yancy says we need a ‘crisis’, by Alex Blasdel (The Guardian)

In his new book, philosopher George Yancy uncovers just how unprepared even well-meaning whites are for a courageous conversation about race

George Yancy’s new book, Backlash, grew out of Dear White America, a piece on the pervasiveness of white racism that he wrote for the New York Times’ philosophy column, The Stone. After the piece was published on Christmas Eve 2015, Yancy received an extraordinary number of responses from white readers, many of whom were aggressively defensive and included racist epithets and threats of physical violence. Backlash extends the argument made in Dear White America, and turns personal and philosophic lenses on the vile responses it received.

This is a key passage.

When you talk about “whiteness” in the letter and book, what do you mean?

Whiteness is a structural, ideological, embodied, epistemological and phenomenological mode of being – and it is predicated upon its distance from and negation of blackness. This is what so many white people forget or refuse to see: their being racialized as white and socially and psychologically marked as privileged has problematic implications for my being black.

Whiteness is what I call the “transcendental norm”, which means that whiteness goes unmarked. As unmarked, white people are able to live their identities as unraced, as simply human, as persons. And this obfuscates the ways in which their lives depend upon various affordances that black people and people of color don’t possess.

White racism is thus a continuum, one that includes the KKK, the loving white Christian and the antiracist white. Even good, moral white people, those who have black friends, friends of color, married to people of color, fight for racial justice and so on, don’t escape white racist injustice against black people and people of color; they all continue to be implicated within structures of white privilege and to embody, whether they realize it or not, society’s racist sensibilities. White people possess white privilege or white immunity from racial disease. And because of this, others of us, black people and people of color, reap the social, political and existential pains of that racialized social skin.

As yet, I’m at a stage of listening, studying and thinking. Epiphanies are rare, and it strikes me as acceptable to take my time and absorb these many lessons. Bear with me.