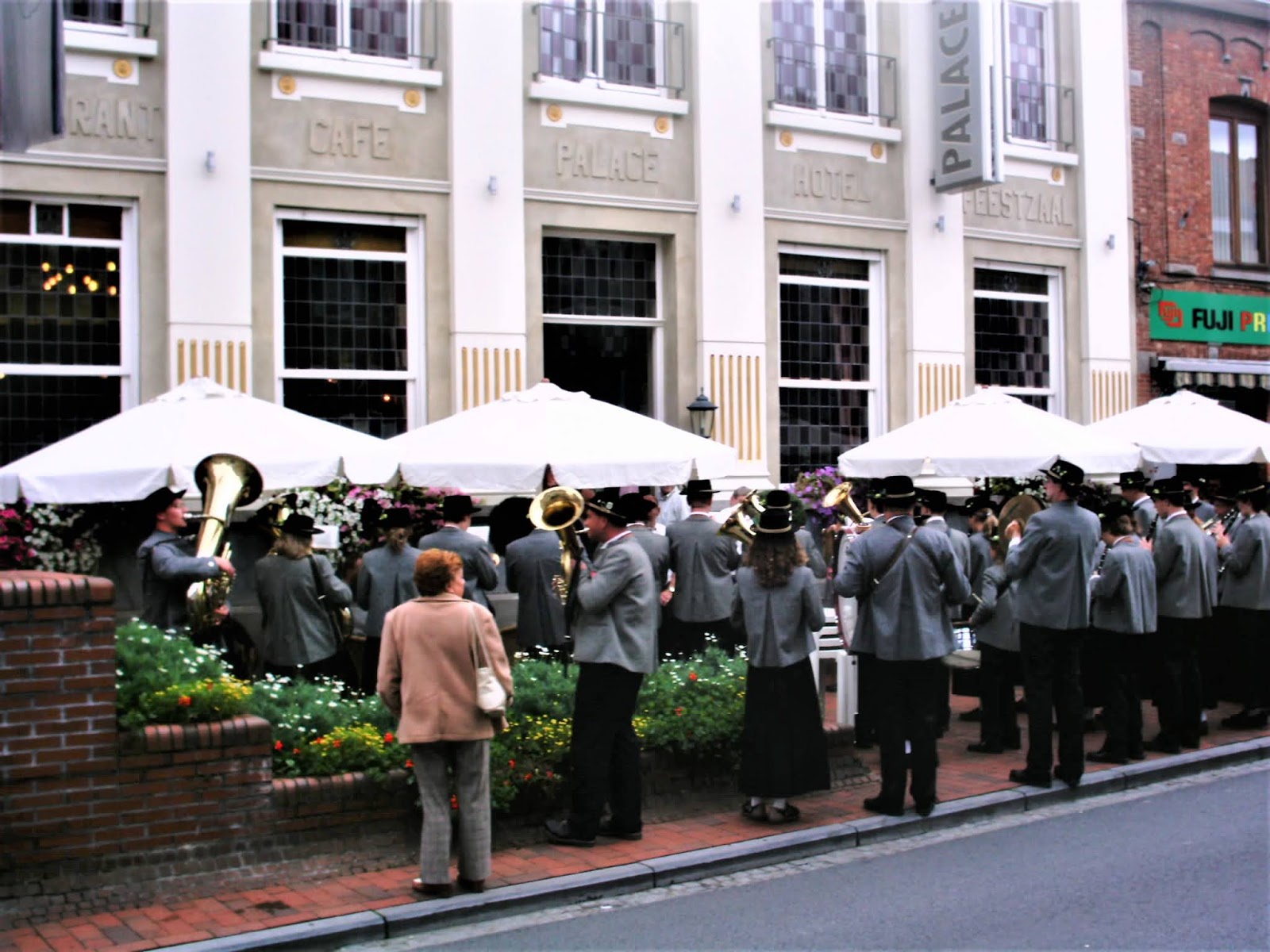 I’m sore because the pandemic postponed Poperinge’s Beer and Hop Festival, and so this week I’ll be flooding the blog pages with reruns of past visits, such as I can remember them. They never taught memory loss at beer pioneer school.

Three views from 2005. Diana and I rode into Poperinge from the coast; we stayed in Ieper and rode the train back and forth to the hop fest.

Guy, the co-owner (with his wife Bea) of the Palace Hotel, was serenaded on the occasion of his 60th birthday. 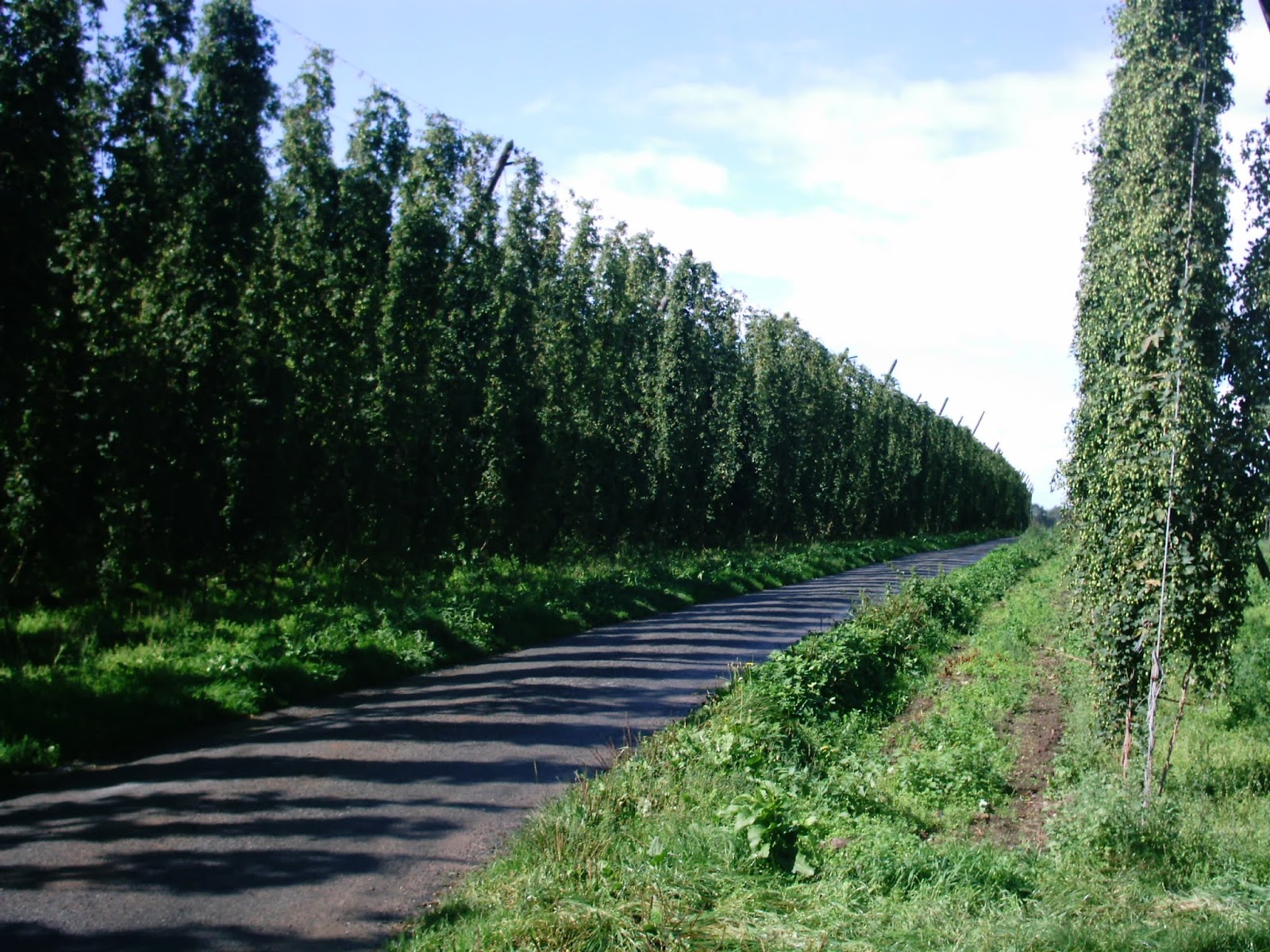 Hops on the cycling route into Poperinge. 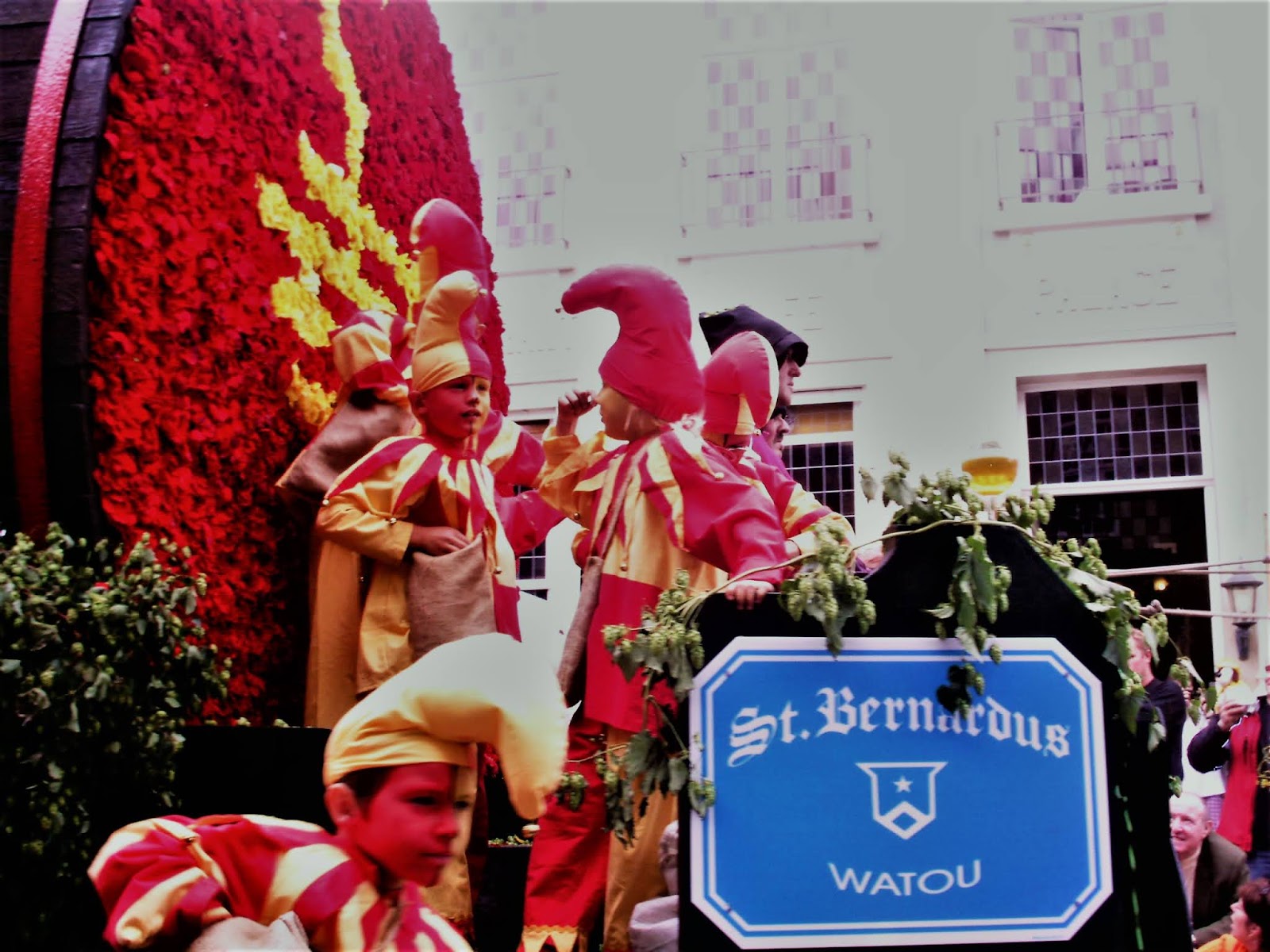 One slice of color from the parade.

In 2005 Diana realized she liked beer after all. Certain kinds, that is. The revelation came in Brugge, when she absconded with my Trappist ale, a Rochefort 10, during our session at t’ Brugs Beertje.

Hence this dispatch from Poperinge, where she closed the deal. It was dated September 22, 2005 and written following our return home for publication at The Potable Curmudgeon.

In the grand tradition of beer advertising, we’ve chosen a beautiful woman to display the product being touted. 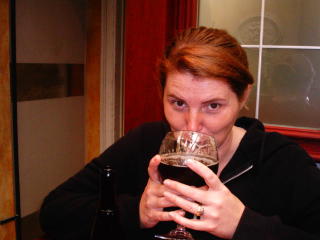 Trust me – it’s really Westvleteren 12, the beer that “disappeared” from circulation when it was selected as the best beer in the world by readers of RateBeer.com.

Not that it was easy to find, even in Belgium … even where it is brewed.

The Cafe de Vrede, across the lane from the Sint Sixtus Abbey, was closed for its annual autumn break, which seems usually to occur at the very same time that beer lovers gather in nearby Poperinge for the triennial hop festival. We biked past the venue, and as my old friend Barrie would say, paused to kiss the lock on the door before proceeding into town.

Arriving at the marvelous Hotel Palace in Poperinge, we found no Westvleteren at that estimable cafe; actually, it wasn’t clear whether Guy had had any from the start, or whether his stock already was depleted by the time we checked on Saturday.

Cafe de la Paix? Fine food and a great beer selection, but no, not there, either.

Then on Sunday, in preparation for the parade, we dined at the Poussecafe, located just up Ieperstraat from the Palace, and the elusive Trappist elixir was right there, printed on the paper menu, in full view.

I asked the server, who proved to be the owner Kurt, “Do you really have this beer in stock?”

He shrugged and replied: “It wouldn’t be listed if I didn’t.”

An incredible lunch followed, and the food was good, too, but I still prefer Rochefort 10, with Westvleteren a close second.

Later, comfortably seated along the parade route, I was introduced to a great new way to enjoy Poperings Hommelbier. 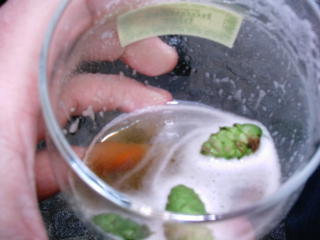 Pitch the lemons and limes, and go back to the basics.