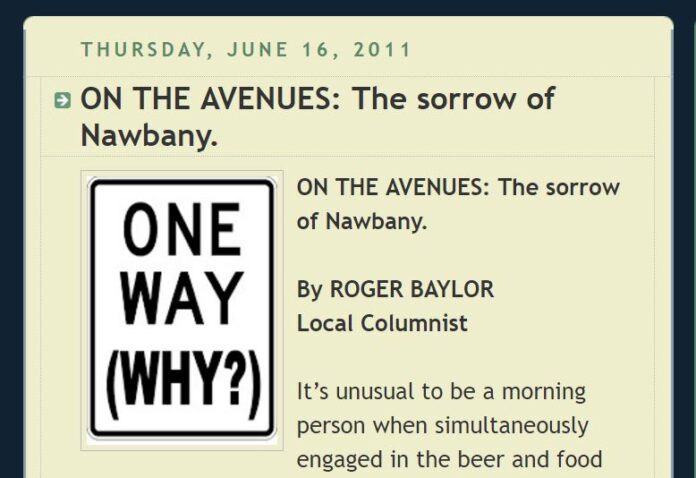 In response to an inquiry, here’s a repeat (26 December 2016) of the story about how ON THE AVENUES came to be. NA Confidential is winding down and will soon cease operations in the current format, although there’ll be an archive at my new web site, currently under construction.

ON THE AVENUES will reappear at the next joint, so stay tuned. 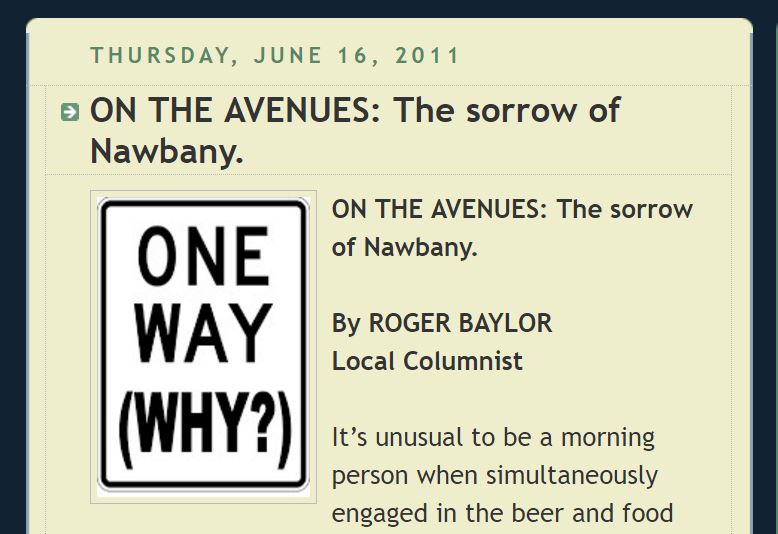 NA Confidential was born in October, 2004. Almost 11,000 posts later, the experience sometimes verges on the coherent, but at the start I had little idea how to proceed, beyond writing for posterity about what was happening right here in New Albany.

Consequently, after five years of beating the bushes, my big break beckoned as 2008 drew to a close.

Last Friday afternoon I met with Steve Kozarovich, publisher of the New Albany Tribune, and agreed to write a 900-word column on a weekly basis, beginning Thursday, January 8, and running on Thursdays thereafter. It is a (modest) for-pay gig, joining paid columns I write biweekly for LEO and quarterly for Food and Dining magazine.

This announcement is provided as a courtesy to the publisher, who now has the opportunity to begin fielding complaints before the column actually appears.

From January 2009 until February 2011, I met 111 consecutive “Beer Money” column deadlines at $40 a pop, then decided to run for city council, necessitating a suspension of my weekly Tribune contribution.

This will be my last column in The Tribune for a while, and there’s a reason for the hiatus.

I’ve decided to take a dram of my own medicine and file to run for city council in the coming primary — yes, as a Democrat, and for an at-large seat.

Because this very newspaper has a policy against permitting its columnists to conduct campaigns in print, and actually enforces it more often than the city’s own long neglected codes, I must return temporarily to the realm of the blogosphere.

And in the blogosphere I was destined to remain, because concurrent with my hiatus, Community Newspaper Holdings Inc. cashiered Kozarovich and combined our local newspapers into a new entity, the News and Tribune. It was to be headquartered in Jeffersonville, instituting a Clark County-centric focus that has become steadily more annoying to New Albanians during the years since, and it caused my column to walk the plank.

Damn, I knew I should have actually won that election … then I could still have a newspaper column, just like Ed Clere, although I’m told that the beer column idea is still on the table for the Spectrum section.

The now departed Coach K used the word “hiatus” prior to my council bid. I had to fetch a thesaurus to know what he meant. Now, somewhere, he and Lucy Van Pelt are holding the football aloft and laughing.

Just my luck. Who’d have known that Linus’s older sister worked for the Retirement Systems of Alabama?

Is it time to go underground, yet?

To Matt Nash: It’s all yours now. Torture the troglodytes often, will you … and try to give us some New Albany news, okay? The Clark County stuff’s already getting old.

Right now, the regular columnist spots are full. I can’t pick up anyone else and still get in letters, cheers and jeers and any editorials in a timely manner.

I still had to drop another columnist (McDonald) on top of when you and Kelley Curran decided to run for office because space became less available after the merger. I’m also trying to keep a balance between Clark County folks like Dodd and Harbeson and Floyd County writers like Amy and Nash. And, of course, I have a freelancer/stringer budget to worry about.

It’s possible a spot would open up in the future and I’ll let you know if that happens.

I spent a few months licking wounds and plotting revenge against the perpetrators, then realized there was much yet to say and write. The answer was to DIY, in this blog forum.

Beginning last week, my Thursday column was reinstituted in this space. The column ran in the News and Tribune from January 2009 until February 2011, when it went on “hiatus” during my run for council. Earlier this week, I learned that the hiatus had been transformed into permanent absence owing to changes in the newspaper’s structure.

This just in: Merger kills a newspaper column.

As a writer, deadlines have a wonderful way of concentrating thought, and so it is my desire to get back into the weekly column habit. This blog’s the place for it until something else comes along.

Furthermore, conceding that the newspaper’s current staff will disagree with me, the consolidation of two editions into one of the same size inevitably will have the effect of reducing coverage of New Albany (and to an extent, Floyd County) affairs. Stated simply, New Albany has lost its newspaper.

“Our newspaper is dead — long live the Internet”, or something like that.

For the time being, and perhaps for a long time to come, this blog is more important than ever before. While I don’t have the time to transform NAC into a comprehensive news and commentary entity, repositioning my weekly column and moving it from Thursday newsprint to Thursday bandwidth is attainable, so that’s how we’ll start the ball rolling. In conjunction with social media, it’s enough for now. I am aware of like-minded ideas for on-line publishing in the community, and will continue monitoring these in the hope that something comes to fruition.

But what to call this new column?

Later this morning, my Thursday column will reappear here. The old “Beer Money” tag, which referred to the limited usefulness of the bare farthings grudgingly paid by the Retirement Systems of Alabama to guest columnists in publications like One Southern Indiana Newspaper, no longer makes sense, seeing as remuneration has completely disappeared.

Instead, my new Thursday column will openly hearken back to the long-departed days of independent, truly local journalism in New Albany: “On the Avenues.” Some of you will know what I mean by this. Look for the Green Mouse to make appearances, too.

In the days of my youth, back when the Tribune actually mattered, a lifer named Jack Powers was the staff do-it-all. He covered the social and political waterfronts in his column, “On the Avenues,” with the help of an all-purpose editorial source and assistant, the so-called Green Mouse.

My column honors these quaint and mostly forgotten aspects of local journalism in New Albany.