As noted in today’s previous post, my two-years-and-five-month run as a guest columnist at the pre-merger New Albany Tribune began in 2009. This was the very first column, which ran on January 10. The photo was my official newspaper photo, as attached here to a 2010 column about something I’m no longer allowed to address openly, hence the “redacted” discretion. 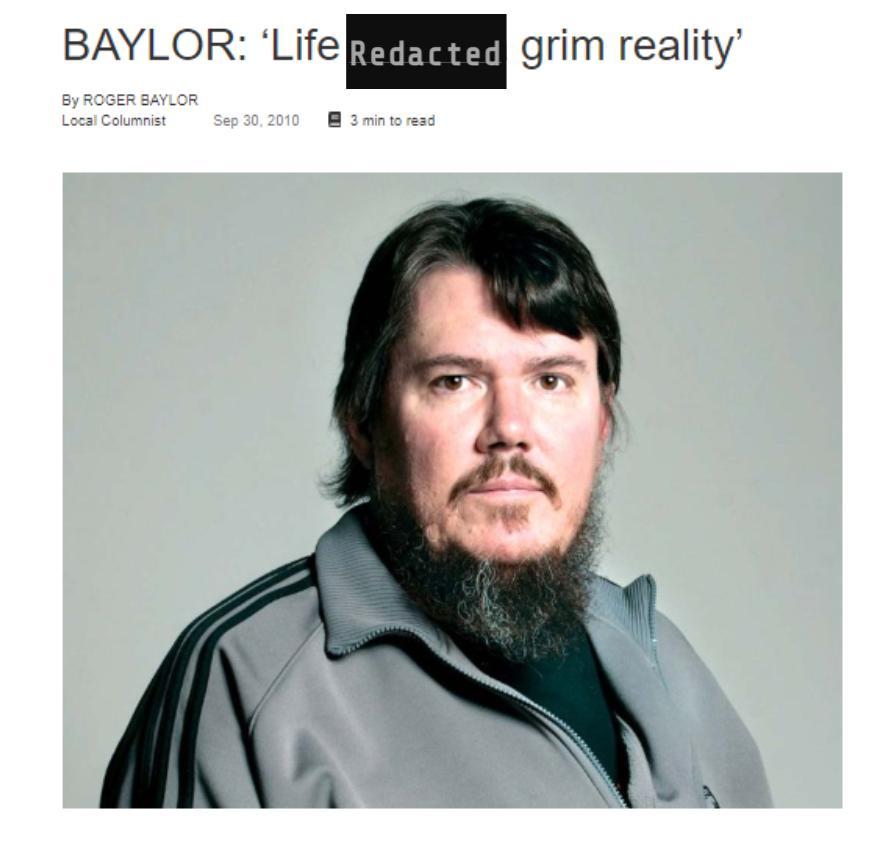 New Albany Is A State of Mind

You might recall that roughly 2,500 years ago, there lived the Greek philosopher called Socrates, a man whose dogged pursuit of knowledge endeared him to succeeding generations of admirers, although not to his fellow Athenians. In fact, most of his neighbors considered him not only an annoyance, but a heretic, too, and if there’s anything to be gleaned from reading history, it’s that there’s always time enough for a priest to throw another heretic on the fire.

So goes the eternal tyranny of the majority, and yet thanks to Plato’s writings, we now recognize Socrates as a peerless moral and social critic. Appropriately, he has been honored by the tag of gadfly, a term for describing “people who upset the status quo by posing upsetting or novel questions, or just being an irritant.”

That’s my kind of guy, although naturally gadflies are detested by small, non-expandable minds of the sort that are the norm in human societies the world over, and who assign themselves the task of protecting the status quo whether or not it is sensible.

Accordingly, you can picture the scene in the agora, with Socrates and his small band of youthful followers avidly questioning accepted beliefs, while the “little people” of Athens hover nearby, muttering, and eavesdropping on the dialogues.

These many centuries later, I can almost hear the anonymous bellow from behind the adjacent stone wall, followed by the pitter-patter of fleeing sandals:

“Hey, Socrates, if you aren’t happy here, then why don’t you get the hell out and leave us alone?”

Socrates stayed, of course, and was made to pay dearly for it. During a period of political upheaval, he was put on trial and convicted of corrupting the morals of Athenian youth. Offered the opportunity to devise his own punishment, the philosopher wryly suggested that his “sentence” include a regular monetary stipend and free meals for life.

Instead, the humorless judges gave Socrates the choice of exile or death, and he opted for the latter, drinking the hemlock, cementing his martyrdom, and proving that in ancient Greece as in modern-day America, folks don’t take kindly to having their premises examined, not to mention taxed … but let’s leave Their Man Mitch’s properties and proprieties out of it, shall we?

And so there I was, cradling a craft-brewed pint of beer within the cozy confines of Connor’s Place and reflecting on the dubious merits of “All I Really Need to Know I Learned in Kindergarten,” when suddenly that nagging, familiar existential question reared up and bit me … again.

“New Albany is a state of mind … but whose?

Numerous other pressing questions have come and gone since I was a youngster growing up in Georgetown, experiencing the sort of small town ambience remembered with warm fuzziness primarily by those who never actually lived through the crushing boredom of it all, queries like, “Where can we get served?” and “Is it really cheating if the teacher doesn’t catch you?”

But nowadays the tough questions keep getting harder to answer, like this one:

Have you ever been standing in the supermarket, trying to fathom the industrial process bakeries use to remove the flavor and texture from white bread in order to make it marketable to the terminally fearful among us, when suddenly a remarkably obese woman down the aisle starts screaming obscenities at her own helpless children, and you realize that all this prattle about free people making informed choices to suit their individual needs must be coming from those who’ve never driven an automobile through New Albany’s decaying streets, artfully dodging listless vagrants, texting drivers and the occasional neglected, doomed dog or cat?

In 2008, Barack Obama enunciated “change” and “hope” as electoral mantras, and predictably, local voters went big for Obama’s befuddled Republican opponent. Therein lies a glimpse of New Albany’s personalized 800-lb gorilla, and the civic psychosis that so degrades our future prospects as a city. It is our persistent failure to muster any degree of comprehension as to what is occurring in the larger world outside the municipal devil we know, and to imagine another way of life.

As an example, consider the simple notion of riding a bicycle in an urban setting. Doing so in New Albany can be profoundly dangerous, in part because of the gaping potholes, and more importantly, as previously observed, because local drivers are notoriously unskilled and inattentive. However, the problem goes beyond an absence of empathy.

To them, anyone who is able to imagine biking and also to achieve it must be mistaken or defective, and poses a vague threat. Any person riding a bicycle surely must be too poor to afford a car, or is restricted to biking owing to mental illness, a DUI conviction, bad personal credit or contrarian tendencies.

In other words, a heretic. Do I hear the sound of flicking Bics?

In this and related matters, the New Albany Syndrome is a very real and self-defeating malady, and one of my goals in life is to somehow locate the source of the dysfunction and drive a stake composed of equal parts modernity and rationality straight through its heart so that future generations just might enjoy a better place to live and work.

Socrates had it right: The unexamined life is not worth living … and the examination begins now.